The Bible and Religious Violence 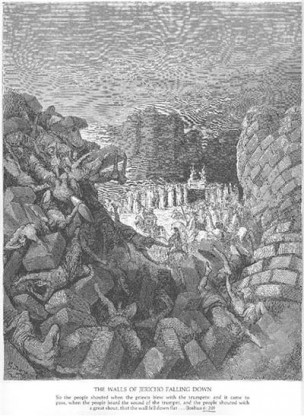 This woodcut by French artist Gustave Doré, titled “The Walls of Jericho Fall Down” (1885), depicts the Israelites’ destruction of Jericho as described in Joshua 6. In his Biblical Views column, Ronald Hendel wonders what is wrong with religion that it inspires religious violence.

Paris, Colorado Springs, Duma—in 2015, fundamentalist terrorists killed innocent people in these cities allegedly in the name of Allah, Christ and Yahweh, respectively. These are just a few recent examples of religious violence inspired by radical forms of Islam, Christianity and Judaism—the world’s three major monotheistic religions, each Biblically based or derived.

“Is there something wrong with Biblically derived monotheism that gives rise to religious terrorism—to murder in the name of God?” asks Ronald Hendel in his Biblical Views column “The Bible and Religious Violence” in the March/April 2016 issue of Biblical Archaeology Review.

The concept of holy war (Hebrew: ḥerem), Hendel points out, is referenced several times in the Hebrew Bible and is a major theme in the Book of Joshua. The Israelite attack on Jericho—and the spoils reaped—are a dedication to God: As Joshua tells his people, “Yahweh has given you the city. The city and everything in it are to be dedicated (ḥerem) to Yahweh” (Joshua 6:16–17). Thus, the Israelites in the Book of Joshua believe their religious violence is justified.

On the ninth-century B.C.E. Mesha Stele (or Moabite Stone), the Moabite vassal King Mesha commemorated his victory over the Israelites, framing the success as a tribute to his god Chemosh: “Chemosh said to me, ‘Go and seize Nebo from Israel,’ and I went in the night, and I battled against it from the break of dawn until noon, and I took it, and I killed all of them—7,000 men and boys and women and girls and maidens—for I dedicated [ḥerem] it to Ashtar-Chemosh, and I took from there the vessels of Yahweh, and I dragged them before Chemosh.”

History—and current events—tells us that religious violence can be as much about material gain as about following doctrine. Indeed, today we see that the extremist group ISIS has been profiting from their devastating destruction of sites in Iraq and Syria.

For a deeper probe into the ideology of religious violence throughout the ancient Near East, and to learn Ronald Hendel’s solution for addressing religious violence today, read the full Biblical Views column “The Bible and Religious Violence” in the March/April 2016 issue of BAR.