Adam and Eve in the Bible

“So the Lord God caused a deep sleep to fall upon the man, and he slept; then he took one of his ribs and closed up its place with flesh. And the rib that the Lord God had taken from the man he made into a woman and brought her to the man.”
—Genesis 2:21–22, NRSV 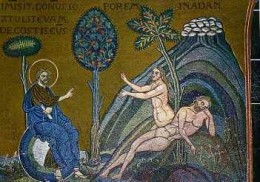 ADAM AND EVE IN THE BIBLE. This mosaic from the Cathedral of Monreale, Sicily, depicts the creation of woman in the Bible. Eve is shown emerging from Adam’s side. Most translations of the Adam and Eve story say that Eve was created from Adam’s rib, but Ziony Zevit contends that she was created from a very different part of Adam’s body.

According to the Bible’s creation account, after making the heavens and the earth, God created humankind. The Adam and Eve story in Genesis 2 states that God formed Adam out of the dust of the ground, and then Eve was created from one of Adam’s ribs. But was it really his rib?

The Hebrew word that is traditionally translated as “rib” is tsela‘. Ziony Zevit, Distinguished Professor of Biblical Literature and Northwest Semitic Languages at American Jewish University in Bel-Air, California, believes that this translation is wrong, as do many scholars. It was first translated as “rib” in the Septuagint, a Greek translation of the Hebrew Bible from the mid-third century B.C.E. However, a more careful reading of the Hebrew word for “rib” in the Adam and Eve story suggests that Eve was created from another, very different, part of Adam’s anatomy—his os baculum (penis bone).

Zevit carefully examines the account of the creation of woman in the Bible in his article “Was Eve Made from Adam’s Rib—or His Baculum?” which appears in the September/October 2015 issue of Biblical Archaeology Review.

Of the 40 appearances of tsela‘ in the Bible, the Adam and Eve story is the only place where it is translated as “rib.” Usually it means the side of something. Zevit explains the nuance of this word:

According to Zevit, “rib” is the wrong translation for tsela‘ in the Adam and Eve story in the Bible. Zevit believes that tsela‘ should be translated as “a non-specific, general term,” such as one of Adam’s lateral limbs, in the Adam and Eve story. Thus, it refers to “limbs lateral to the vertical axis of an erect human body: hands, feet, or, in the case of males, the penis.”

Which of these lateral limbs lacks a bone? Human males do not have a penis bone, but many mammals do. Zevit concludes that in the story of Adam and Eve in the Bible, the woman was created from the man’s baculum to explain why this appendage does not have a bone.

To see Ziony Zevit’s full explanation of the Adam and Eve story in the Bible, read his article “Was Eve Made from Adam’s Rib—or His Baculum?” in the September/October 2015 issue of BAR.

——————
BAS Library Members: Read the full article “Was Eve Made from Adam’s Rib—or His Baculum?” by Ziony Zevit in the September/October 2015 issue of Biblical Archaeology Review.

This Bible History Daily feature was originally published on September 15, 2015.