What the Codex Bezae reveals about Jesus’ temperament 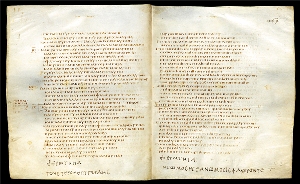 In the fifth-century C.E. Codex Bezae, an early edition of the New Testament written in Greek, the Gospel of Mark describes Jesus’ anger before healing a leper (Mark 1:41). While later scribes changed Jesus’ anger to compassion, it is likely that Codex Bezae preserves the original reading. Image: Cambridge University Library/ff.288v & 289r from Nn.2.41.

Textual variants among ancient manuscripts aren’t usually as controversial as chapter 1, verse 41 of the Gospel of Mark. Sometimes one scribe spelled a word differently on his manuscript, while another might have accidentally skipped or repeated some of the text he was copying. These cases are minor variants and don’t really change the meaning of the text. Other times, however, scribes added to or even changed text to clarify a passage or suit the theological preferences of their communities. That’s when things get interesting, and this passage in the Gospel of Mark offers an especially intriguing example.

In Mark 1:41, a leper has approached Jesus seeking to be healed. Most Greek manuscripts (the New Testament was originally written in Greek), as well as later translations, say that Jesus was moved with compassion and healed the man. A few manuscripts, however, say that Jesus’ anger was kindled before he healed him. So did the verse mean to convey Jesus’ anger or his compassion? If this were a popularity contest, the “compassion” reading would surely win. In 1998, the authoritative book Text und Textwert recorded only two Greek manuscripts (and a few early Latin ones) that contained the reading expressing Jesus’ anger. But, as Dr. Jeff Cate announced in The Folio,* the bulletin of the Ancient Biblical Manuscript Center at the Claremont School of Theology, close examination of one of those two Greek manuscripts has shown that it does not contain the word for either anger or compassion. Just as Matthew and Luke did when retelling Mark’s story in their gospels (cf. Matthew 8:2–4; Luke 5:12–16), the scribe of this Markan manuscript simply left it out. Mark composes his account of the life of Jesus in this scene from a 12th-century manuscript from Constantinople.

This now leaves the other Greek manuscript, the fifth-century C.E. Codex Bezae, as the sole Greek witness to the reading expressing Jesus’ “anger.” Much like the cheese in “The Farmer in the Dell,” Codex Bezae stands alone.

But most interesting of all, the Codex Bezae may in fact have the better (i.e., original) reading. As New Testament scholar Bart Ehrman pointed out in a 2005 article in Bible Review, “one factor in favor of the ‘angry’ reading is that it sounds wrong.”** It is much easier to believe that early scribes were troubled by Jesus’ anger and changed it to his feeling compassion, rather than the other way around. Later scribes also would have preferred the easier “compassion” reading and copied it until it became the more popular reading. (As Ehrman explains, there are other passages in the Gospel of Mark that seem to support the reading conveying Jesus’ anger.) Thus does Codex Bezae now stand as a lonely witness to what is very likely the original Greek text of Mark 1:41.

Mark and John: A Wedding at Cana—Whose and Where? by James Tabor

What’s Funny About the Gospel of Mark? by Robin Gallaher Branch

This Bible History Daily feature was originally published on May 24, 2012.