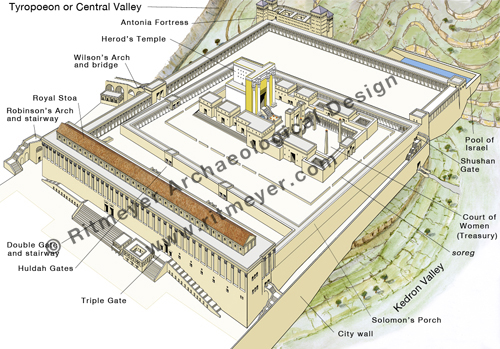 Herod extended the Hasmonean Temple Mount in three directions: north, west and south. At the northwest corner he built the Antonia Fortress and in the south, the magnificent Royal Stoa.

In 19 B.C. the master-builder, King Herod the Great, began the most ambitious building project of his life—the rebuilding of the Temple and the Temple Mount in lavish style. To facilitate this, he undertook a further expansion of the Hasmonean Temple Mount by extending it on three sides, to the north, west and south. Today’s Temple Mount boundaries still reflect this enlargement.

The cutaway drawing below allows us to recap on the development of the Temple Mount so far: King Solomon built the First Temple on the top of Mount Moriah which is visible in the center of this drawing. This mountain top can be seen today, inside the Islamic Dome of the Rock. King Hezekiah built a square Temple Mount (yellow walls) around the site of the Temple, which he also renewed. In the Hasmonean period, the square Temple Mount was enlarged to the south (red walls). Finally, King Herod the Great enlarged the mount to double its size (grey walls) by building 15 feet-thick retaining walls, which are still standing today. The many cisterns cut into the mountain are also shown.

A visualization of this Temple Mount was made possible by combining the historical sources with the results of archaeological exploration. The main historical source is the first-century historian Josephus Flavius. His works, The Jewish War and Jewish Antiquities, although prone to exaggeration, are indispensable for this period. Also invaluable is the Mishnah, the earliest code of rabbinic law, written about 200 A.D., particularly the Tractate Middot, which deals with measurements. The New Testament adds further detail and context. All this was augmented by the results of the excavations to the south and west of the Temple Mount following the Six-Day War in 1967.

Read “Quarrying and Transporting Stones for Herod’s Temple Mount” by Leen Ritmeyer as it was published in BAR.

Herod’s extension of the Eastern Wall to the north required the filling in of a deep valley to the north of the pre-Herodian Temple Mount. The Shushan Gate remained the only gate in the Eastern Wall. Towers were erected at each corner and a large water reservoir was built at the northeast corner, the so-called Pool of Israel.

The present-day Eastern Wall of the Temple Mount is 1536 feet long. The central part of this wall (shown in blue) dates from the time of King Hezekiah. In the drawing, the gate just below and to the right of the Temple is the Shushan Gate. To the south of the central section is the Hasmonean extension (red), while both ends of this wall were further extended by Herod the Great (yellow). The Herodian extension to the north of the central part of the Eastern Wall (Hezekiah’s expansion) required the filling in of a deep valley, known as the Bezetha Valley.

The Western Wall, which had four gates, was placed some 82 feet (25 m) outside the square platform with its southwest corner built on the opposite side of the Tyropoeon Valley.

The Western Wall of the Temple Mount is 1590 feet long. The Antonia Fortress is on the left. The four gates in the Western Wall are, from left to right, Warren’s Gate, Wilson’s Arch and bridge, Barclay’s Gate and Robinson’s Arch and stairway. This drawing also shows the lay of the bedrock below the Herodian street.

The Southern Wall featured two gates, the Double Gate and the Triple Gate, often erroneously referred to as the Huldah Gates.

The Southern Wall of the Temple Mount is 912 feet long. The extant remains of this wall are shown in yellow. A monumental stairway led up to the Double Gate, indicating that this was an important entry point for many worshippers. In between this stairway and that leading up to the Triple Gate is a ritual bathing complex and a public building.

The most fortified feature in the Northern Wall was the massive Antonia Fortress (right in the drawing below), built to protect the Temple against attacks coming from the north and to guard the mount in times of strife. A large reservoir, the Pool of Israel (left) provided additional protection to the Temple Mount.

The Northern Wall of the Temple Mount is 1035 feet long. The Pool of Israel, which was constructionally an integral part of the Temple Mount, can be seen on the left. The Antonia Fortress is on the right. A brief reference in Josephus points to the possible existence of a gate in the middle of this wall.

Once the platform was completed, double colonnades, or porticoes, were built above the outer walls to provide shelter from the elements. A huge hall called the Royal Stoa, with four rows of columns, was erected on the southern end. The pre-existing eastern portico that stood on the square mount was left unchanged. As it belonged to a pre-Herodian period, it was called Solomon’s Porch. Near the center of this platform a new gold-covered Temple was constructed that in turn was surrounded by many other buildings.

In 70 A.D., this splendid structure that had taken 46 years to build (John 2.20) was destroyed by the Romans. The only vestiges of the compound to survive the destruction were the four retaining walls that supported the Temple platform; the best known today is the Western Wall.

This drawing is the 7th in this series that were made specially for the new Temple Mount guide book. For the previous drawings see: Mount Moriah, Jebusites, Solomon, Hezekiah, Nehemiah and the Hellenistic and Hasmonean periods.

This Bible History Daily feature was originally published on December 3, 2014.