Bethlehem Church of the Nativity to be First Palestinian UNESCO Site

June 29, 2012 update: Jesus’ traditional birthplace at Bethlehem’s Church of the Nativity was confirmed as the first Palestinian UNESCO world heritage site by a 13-6 vote. 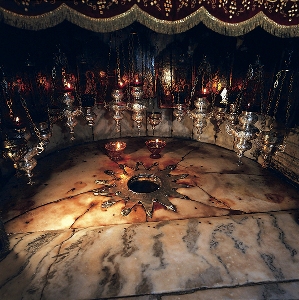 A The golden star in the floor of the Church of the Nativity marks the traditional location Jesus’ birthplace. The Bethlehem church was recently nominated for the UNESCO World Heritage List. Photograph by Garo Nalbandian

Read the original Bible History Daily article on the nomination of Jesus’ birthplace as a UNESCO site below:

The Church of Nativity in Bethlehem, built above the cave that traditionally marks Jesus’ Birthplace, was recently nominated to become part of the UNESCO World Heritage List. One of Christianity’s holiest sites, the first basilica was built in the fourth century C.E., and the sixth century Church of the Nativity still stands today. While few would contest that the site meets the UNESCO World Heritage List criteria of “holding outstanding value,” bearing “a unique or at least exceptional testimony to a cultural tradition” or being “directly or tangibly associated with events or living traditions, with ideas, or with beliefs, with artistic and literary works of outstanding universal significance,” the nomination of a Palestinian UNESCO site has been a controversial affair. The Palestinian Territories were granted UNESCO membership in October 2011 over Israel and the United States’ objections, who responded by cutting funding to the UNESCO program.

The Church of the Nativity is located in Bethlehem and is the largest tourist attraction in the Palestinian Territories. The church’s Grotto of the Nativity has been considered Jesus’ birthplace since ancient times, and the traditional precise spot of the birth of Jesus is marked by a 14-pointed silver star in the floor. Nada Atrash, of Bethlehem’s Center for Cultural Heritage Preservation, told CNN* reporters that adding the Church of the Nativity to the UNESCO World Heritage List would be “a Palestinian dream, and as a reward of 11 years of work in the field of preserving the cultural and natural heritage in Palestine.” The Church of the Nativity in Bethlehem, sacred to Christians as the traditional location of Jesus’ birthplace, may become the first Palestinian UNESCO site.