Does the Church of the Redeemer hold the answer? According to the New Testament, Golgotha was the name of the site where Jesus was crucified. Where is Golgotha located in Jerusalem? In their Archaeological Views column “Golgotha: Is the Holy Sepulchre Church Authentic?” in the May/June 2016 issue of Biblical Archaeology Review, Marcel Serr and Dieter Vieweger discuss past and current investigations into the site where Jesus was crucified.

Where is Golgotha today? The exact location where Jesus was crucified is disputed. In the fourth century C.E., the Church of the Holy Sepulchre was built at the site of Golgotha as identified by Roman emperor Constantine’s mother, Helena. However, scholars began to question this identification in the 19th century, since the Church of the Holy Sepulchre is inside the city walls of the present-day Old City of Jerusalem. Golgotha would have to have been located outside the city in accordance with Roman and Jewish customs of the time. The Gospels, too, seem to suggest that Jesus was crucified outside of the city (Mark 15:20; Matthew 27:31ff; John 19:17ff). So where is Golgotha located? 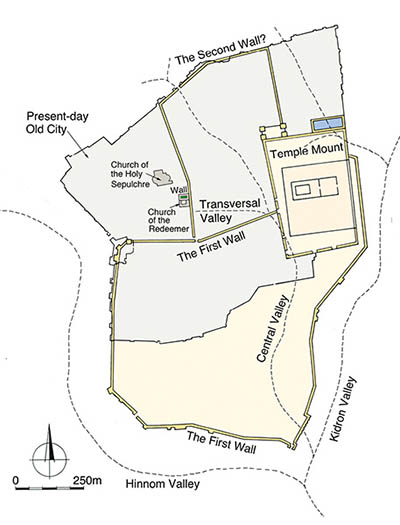 Where is Golgotha? Was the Church of the Holy Sepulchre, the traditional site where Jesus was crucified, located within or outside of the city walls when it was built in the fourth century C.E.? The drawing here depicts the present-day Old City of Jerusalem (shaded in gray) as well as the proposed location of the so-called Second Wall that would have stood during Jesus’ time. Drawing: Leen Ritmeyer.

It’s important to note that the current Old City walls are not the ones from Jesus’ time. As Serr and Vieweger note in their Archaeological Views column, “Efforts to find a so-called Second Wall south of the Holy Sepulchre Church that had served as the northern wall of Jerusalem in Jesus’ time (and would have moved the site of the church outside the city in Jesus’ time) proved elusive—although Josephus, the knowledgeable first-century Jewish historian, does refer to such a wall (The Jewish War 5.146).”

But in the 1970s, German archaeologist Ute Wagner-Lux of the German Protestant Institute of Archaeology in Jerusalem excavated under the Church of the Redeemer and determined that this wall could not have been the Second Wall. Why? “This wall was only five feet thick—far too narrow to be a city wall,” say Serr and Vieweger. So the search began anew.

To learn what evidence leads Serr and Vieweger to believe the Church of the Holy Sepulchre could be the authentic location of Golgotha, read their full Archaeological Views column “Golgotha: Is the Holy Sepulchre Church Authentic?” in the May/June 2016 issue of Biblical Archaeology Review.

This Bible History Daily feature was originally published on May 23, 2016.—Ed.