Reflections on a Visit by BAS Director of Educational Programs Sarah K. Yeomans. The fragmentary Tel Dan Stela, containing the Tel Dan inscription, is one of the many highlights at the Israel Museum. Photo: Zev Radovan www.biblelandpictures.com

I have been to Jerusalem several times in the course of my fieldwork, ticking off the obvious sites as though working my way through a checklist: The City of David, the Church of the Holy Sepulcher, the Western Wall, the Temple Mount – the list goes on. No one who knows Jerusalem will argue that there are more sites to see and experience than the average tourist’s trip will allow. It is for this reason (and the fact that the Israel Museum was undergoing an extensive, 3-year renovation project) that after 3 or 4 visits to Jerusalem over the past three years I still had not made my way out of the Old City to see it.

On my most recent visit to Israel, however, I had no excuse. I had marked off all of the major sites on my checklist and the museum had opened once again to the public in the summer of 2010. It was time to go. Even for this I had a mental checklist prepared: The Shrine of the Book, where the Dead Sea Scrolls are beautifully displayed, the 50:1 scale model of the Second Temple, evoking a startlingly and magnificently detailed image of ancient Jerusalem, the Tel Dan stele, on which the first known extra-biblical reference to the House of David is inscribed, and of course, the cultic stele that was discovered in Bethsaida, which is of particular interest to me since I have been excavating there for the past three seasons.

With students in tow, my colleagues and I headed off to the new museum, fully expecting to breeze through the archaeology wing, see the requisite highlights, and get back in time to move onto the next item on our itinerary. There are other wings at the Israel Museum, of course, though I did not expect to have more than a cursory interest in them. We had a timetable to keep.

I was wrong. So wrong, in fact, that not only did we stay at the museum for more than four hours that day, some of us – myself included – elected to go back several days later. The museum is nothing less than a national treasure, and a collection of which the state of Israel is justifiably proud. New innovations and ideas regarding the communication of narrative through material culture were highlighted with an excellent effect. Every gallery told a story, and every object had a place within it. It is one of the most coherent museums I have ever seen.

The archaeological wing is breathtaking – and extensive. Artifacts from prehistory to the Ottoman period are organized chronologically, and the display includes everything from the horns of a gigantic, now-extinct bull to statuary of the highest quality from the artistic apogees of ancient Greece and Rome. It also contains one of the finest exhibits of ancient glass I have ever seen, and provides an excellent visual explanation of how such exquisite objects were made.

One of the museum’s many strengths is the visceral experience that it creates for the modern visitor. At least four synagogue interiors from three continents and periods spanning millennia are on display. The Rothschild Room, a reconstruction of an 18th-century French salon that was donated to the state of Israel by Baron Edmond de Rothschild, not only provides an atmospheric glimpse into the height of the Rococo artistic movement, it also served as the cornerstone – and impetus – for the founding  of the museum by the new Israeli state in 1965. Rembrandt's St. Peter in Prison is one of the many non-archaeological treasures housed at the Israel Museum

People from around the world have taken an interest in the Israel Museum, and the resulting patronage has provided for an impressive fine art collection that rivals that of the finest museums in Europe. Works in the collection read like a “Who’s Who” of artistic greats: Claude Monet, Auguste Rodin, Edgar Degas, Nicolas Poussin, Lucas Cranach the Younger, Peter Paul Rubens, Il Sassoferrato, Sir Thomas Lawrence and many others. Some of the finest micromosaics I have seen outside of the Vatican are on display, and I was delighted to encounter my favorite Rembrandt painting:  the powerful and poignant St. Peter in Prison.

We will be returning to Israel next year, and I am already looking forward to re-visiting this masterfully done museum. It was one of the highlights of my most recent visit, and I look forward to introducing a new group of students to such a fine collection that not only highlights Jewish history and culture, but that of all humanity. 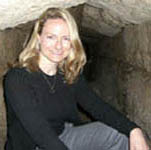 Sarah K. Yeomans is an archaeologist, Director of Educational Programs at the Biblical Archaeology Society and a faculty member at West Virginia University. She spent six years living, teaching and researching in Italy, and is a certified archaeological speleologist with the city of Rome.