Where Jesus heals the paralytic

Among the most famous of Jesus’ miracles is recounted in the Gospel of John, where Jesus heals the paralytic at the Bethesda Pool (John 5:2-9). It is not the only one of Jesus’ miracles of healing to take place at a pool in Jerusalem, however. In addition to the Bethesda Pool, the Gospel of John also says that Jesus healed the blind man at the Siloam Pool. The Siloam Pool was discovered in 2005 and was quickly identified with the pool mentioned in John. The Bethesda Pool, on the other hand, was excavated in the late 19th century, but it has taken more than 100 years for archaeologists to accurately identify and interpret the site. The Siloam Pool has been identified as a mikveh. Is it possible that the Bethesda Pool was also a mikveh, meaning that both of Jesus’ miracles were performed at Jewish ritual baths? This is what author Urban C. von Wahlde proposes in “The Puzzling Pool of Bethesda.” 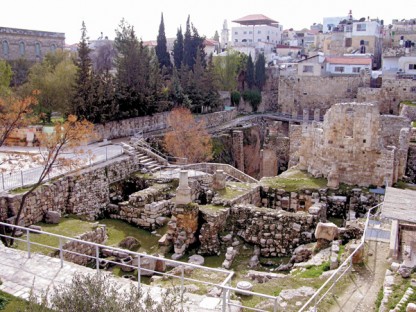 The Bethesda Pool, where Jesus heals the paralytic man in the Gospel of John, is a complex site. It appears to have been a mikveh, or ritual bath. As the spot of one of Jesus’ miracles, the Bethesda Pool was built over in subsequent periods with chapels and churches that are still visible today.

When Jesus heals the paralytic in the Gospel of John, the Bethesda Pool is described as having five porticoes—a puzzling feature suggesting an unusual five-sided pool, which most scholars dismissed as an unhistorical literary creation. Yet when this site was excavated, it revealed a rectangular pool with two basins separated by a wall—thus a five-sided pool—and each side had a portico.

The Jesus miracle story also tells how many people sought the Bethesda Pool’s healing powers. The first person to enter the pool when the waters were stirred up would supposedly be cured of his or her ailment. But, the paralytic tells Jesus, he can never get into the water quickly enough. So Jesus immediately cures him, and he is able to get up and walk.

This story about Jesus’ miracle suggests a long history of healing at the site. Roman medicinal baths constructed at the Bethesda Pool only a century or two later reflect this continued tradition. When Christians controlled Jerusalem in the Byzantine and Crusader periods, they liked to mark the sites of Jesus’ miracles and other important events in his life, so they added a chapel and churches that now cover the Bethesda Pool complex.

So why a pool with two basins? The archaeological evidence shows that the southern basin had broad steps with landings, indicating that it was indeed a mikveh. The northern basin provided a reservoir, or otzer, to continually replenish and repurify the mikveh with fresh water flowing south through the dam between them. Jerusalem’s pilgrims would flock to the Bethesda Pool and Siloam Pool to purify themselves in these public mikva’ot and, at times, to seek healing.

——————
Subscribers: Read more about the site of one of Jesus’ miracles in Urban C. von Wahlde’s “The Puzzling Pool of Bethesda,” Biblical Archaeology Review, September/October 2011.

This Bible History Daily feature was originally published in June 2013.