The dates assigned the Siloam Inscription and Jerusalem tunnels are questioned A young boy wades through Hezekiah’s Tunnel, the most famous of the Jerusalem tunnels. The image brings to mind the discovery of the Siloam Inscription—located at the southern end of Hezekiah’s Tunnel—by a youth in 1880. Photo: Hershel Shanks.

Hezekiah’s Tunnel, part of Jerusalem’s water system, is located under the City of David. It connects the Gihon Spring—Jerusalem’s fresh water supply—with the Siloam Pool. According to 2 Chronicles 32:2–4 and 2 Kings 20:20, this tunnel was dug during the reign of King Hezekiah of Judah to prepare Jerusalem for the imminent attack of the Assyrian king, Sennacherib. In the Bible, Hezekiah redirected the water through old and newly dug Jerusalem tunnels. However, many have wondered if Hezekiah’s Tunnel was actually dug by Hezekiah at the end of the eighth century B.C.E. (Iron Age II). In the September/October 2013 issue of BAR, editor Hershel Shanks reviews the evidence for the dating of the Jerusalem tunnels in “Will King Hezekiah Be Dislodged from His Tunnel?” 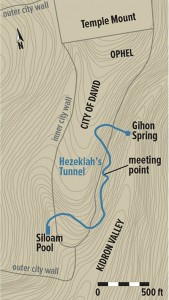 As described in the Siloam Inscription, Hezekiah’s Tunnel was dug by two teams, who worked in opposite directions and met in the middle, to prepare for the invasion of Sennacherib. In the Bible, this impressive feat is detailed in 2 Chronicles 32:2–4.

The second argument concerns the amount of time it would have taken to dig Hezekiah’s Tunnel. Based on the type of rock in Jerusalem tunnels, geologists Amihai Sneh, Eyal Shalev and Ram Weinberger contend that Hezekiah’s Tunnel could have been hewn in no less than four years. Did Hezekiah have time to dig the tunnel before the arrival of Sennacherib? In the Bible, it does not specify the amount of time between the threat of attack and the siege itself, but Assyrian records shed light on the matter. (In the Bible History Daily web-exclusive discussion Regarding Recent Suggestions Redating the Siloam Tunnel, leading archaeologists Aren Maeir and Jeffrey Chadwick propose that Hezekiah had ample time to construct the tunnel during the revolt against Assyria.)

The final argument hinges on the relationship of the various channels of the water system in Jerusalem. Tunnels were dug in very different periods, ranging from the Middle Bronze Age to the Second Temple period.

Ronny Reich and Eli Shukron, who have excavated the City of David near the Gihon Spring extensively, believe that the starting point of Hezekiah’s Tunnel was Tunnel IV, which is connected to the Round Chamber of the Rock-cut Pool. At the entrance to Tunnel IV from the Rock-cut Pool there is a place that had been smoothed for a plaque. The similarity between this plaque and the Siloam Inscription supports the idea that Tunnel IV marked the beginning of Hezekiah’s Tunnel, just as the Siloam Inscription marked its end.

A house built on top of rubble fill, which blocked the entrance to Tunnel IV, was found in the Round Chamber. Some of the pottery in the fill under the house dates to the late ninth–early eighth century B.C.E. (Iron Age IIa)—which predates the time of Hezekiah by nearly a hundred years. Based on this pottery, Reich and Shukron date the house to the late ninth or early eighth century B.C.E. as well. 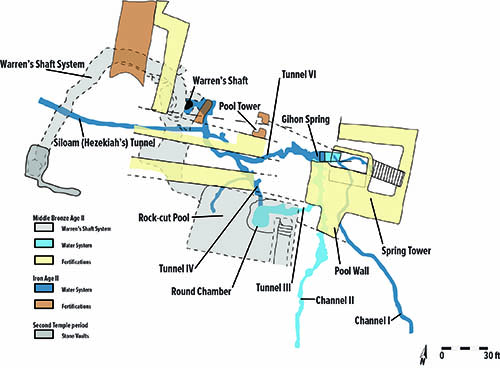 In Jerusalem, tunnels—numerous and crisscrossing—of the water system are difficult to keep straight, but through their excavations in the subterranean levels of the City of David, Ronny Reich and Eli Shukron have mapped out the Jerusalem tunnels. The Siloam, or Hezekiah’s, Tunnel connects to the Gihon Spring via Tunnel VI. Reich and Shukron believe that the starting point of Hezekiah’s Tunnel was in Tunnel IV.

According to the rules of deposition, Tunnel IV and Hezekiah’s Tunnel had to predate this house since debris underneath the house were used to block Tunnel IV. Additionally, if the two channels had not been dug, water would have continued to flow into the Rock-cut Pool, and the house would have been underwater. On this basis, Reich and Shukron argue that Tunnel IV and Hezekiah’s Tunnel must have been constructed by one of Hezekiah’s predecessors, dating as early as the time of King Jehoash (835–801 B.C.E.)—a century before Sennacherib’s siege of Jerusalem in 701 B.C.E.

——
Subscribers: Read Hershel Shanks’s full article “Will King Hezekiah Be Dislodged from His Tunnel?” by BAR as it appears in the September/October 2013 issue of Biblical Archaeology Review. Not a BAS Library or All-Access Member yet? Join today.

This Bible History Daily feature was originally published on August 23, 2013.