According to the Bible, “the men of Sodom were wicked” (Genesis 13, verse 13). For its many sins, God destroyed Sodom and all the inhabitants of the “cities of the plain” in an intense conflagration, but not before allowing Abraham’s nephew Lot and his family to flee to safety.

The stories of Sodom and its destruction, whether historical or not, were clearly understood to have occurred near the Dead Sea, among the so-called “cities of the plain” mentioned in Genesis 13, verse 12. But where exactly was this plain, and was a particular site associated with Sodom? In the article “Where Is Sodom?” in the March/April 2013 issue of BAR, archaeologist Steven Collins combines clues from Biblical geography with archaeological evidence from the site of Tall el-Hammam in Jordan to suggest that the author of Genesis 13 located Sodom in a fertile area northeast of the Dead Sea. 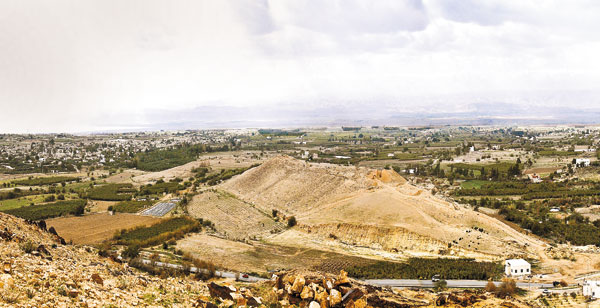 In the article “Where Is Sodom?” archaeologist Steven Collins, using clues from the Biblical geography of Genesis 13 together with archaeological evidence from the site of Tall el-Hammam (pictured), argues that Biblical tradition located Sodom in a fertile area northeast of the Dead Sea. Photo: Michael C. Luddeni.

So where is Sodom, according to the Biblical geography of Genesis 13? Sodom and its sister cities are located in the large oval-shaped, fertile plain just north of the Dead Sea called simply ha-kikkar, or “the Disk” (Genesis 13, verse 13). In Biblical geography, this well-watered disk-shaped plain, said to have been located east of the highland towns of Bethel and Ai, was an area “like the garden of the Lord, like the land of Egypt” where Lot moved his family after his quarrel with Abraham (Genesis 13, verse 10). It is also the place where the Biblical writers set their dramatic tale of Sodom’s wickedness and destruction (Genesis 19).

Seeking to answer the question “Where is Sodom?” and using the Biblical geography of Genesis 13 as a guide, Collins decided to excavate Tall el-Hammam, an extensive and heavily fortified site located in modern Jordan at the eastern edge of the kikkar. First inhabited during the Chalcolithic period (4600–3600 B.C.E.), the site attained its maximum size during the Middle Bronze Age (c. 2000–1600 B.C.E.) and became one of the largest cities in Canaan. But unlike other Canaanite cities that continued to flourish in the Late Bronze Age (1550-1200 B.C.E.), Tall el-Hammam was destroyed by fire at the end of the Middle Bronze Age and remained uninhabited for centuries.

Read responses by scholars Bill Schlegel and Todd Bolen regarding the location of Sodom.

Across Tall el-Hammam, archaeologists found widespread evidence of an intense conflagration that left the Middle Bronze Age city in ruins. They found scorched foundations and floors buried under nearly 3 feet of dark grey ash, as well as dozens of pottery sherds covered with a frothy, “melted” surface; the glassy appearance indicates that they were briefly exposed to temperatures well in excess of 2,000 degrees Fahrenheit, the approximate heat of volcanic magma. Such evidence suggests the city and its environs were catastrophically destroyed in a sudden and extreme conflagration.

Was it this event—which destroyed Hammam and the other cities of the kikkar—that was remembered by the Biblical writers in their telling of the story of Sodom?

This Bible History Daily feature was originally published on February 20, 2013.