Discovery made at Hierapolis, one of the major Christian sites in Turkey 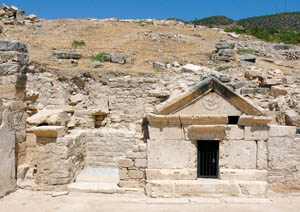 Amid the remains of a fourth- or fifth-century church at Hierapolis, one of the most significant Christian sites in Turkey, Francesco D’Andria found this first-century Roman tomb that he believes once held the remains of the apostle Philip. Photo: Archive of the Italian Archaeological Mission to Hierapolis.

At about the same time as the July/August 2011 issue of Biblical Archaeology Review was hitting the newsstands, containing an article about St. Philip’s Martyrium,* author and excavation director Francesco D’Andria was making an exciting new discovery in the field at Hierapolis, one of the most significant sites in Christian Turkey. A month later he announced it: They had finally found the tomb of the martyred apostle Philip.

The tomb wasn’t discovered at the center of the octagonal hilltop martyrium as long expected, however, but in a newly excavated church about 40 yards away. D’Andria’s team found a first-century Roman tomb located at the center of the new church, which he says originally contained Philip’s remains. This early church of Christian Turkey was built around the tomb in the fourth or fifth century, and the nearby martyrium was built around the same time, in the early fifth century.

The remains of the apostle Philip are no longer in the tomb, however. According to D’Andria, the saint’s relics were very likely moved from Hierapolis to Constantinople at the end of the sixth century and then possibly taken to Rome and placed in the newly dedicated Church of St. Philip and St. John (now the Church of the Holy Apostles), although 12th-century reports describe seeing Philip’s remains still in Constantinople, the seat of Christian Turkey. 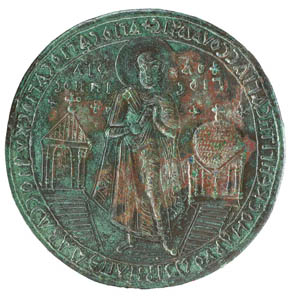 This new discovery also sheds light on the wonderful imagery of the rare sixth-century bronze bread stamp from the Virginia Museum of Fine Arts that we published in our article about Philip’s Martyrium. The structures on either side of the saint can now be identified as the domed martyrium (on the right) and the new Byzantine basilical church containing the tomb of the apostle Philip (on the left), both of which were important Christian sites in Turkey.

——————
Based on Strata, “Philip’s Tomb Discovered—But Not Where Expected,” Biblical Archaeology Review, January/February 2012.

A team led by excavation director Francesco D’Andria in Hierapolis also uncovered the remains of Pluto’s Gate, a site considered an entrance into the underworld in the Greco-Roman period. Read about it in Bible History Daily.