The Siloam Pool has long been considered a sacred Christian site, even if the correct identification of the site itself was uncertain. According to the Gospel of John, it was at the Siloam Pool where Jesus healed the blind man (John 9:1–11).

Traditionally, the Christian site of the Siloam Pool was the pool and church that were built by the Byzantine empress Eudocia (c. 400–460 A.D.) to commemorate the miracle recounted in the New Testament. However, the exact location of the original pool as it existed during the time of Jesus remained a mystery until June 2004. 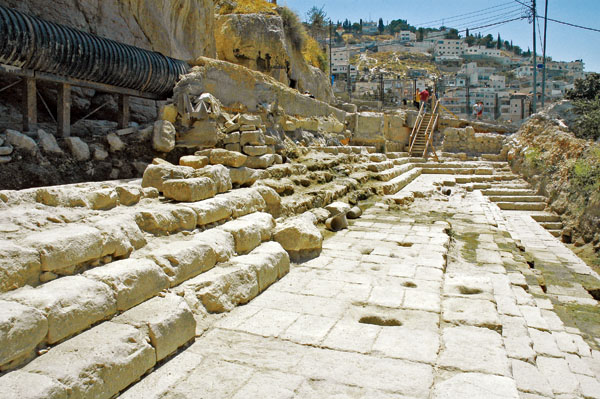 In 2004, the stepped remains of the ancient Siloam Pool, long thought to be located elsewhere, were uncovered near the City of David. According to the Gospel of John, it was at this sacred Christian site that Jesus healed the blind man. Photo: Todd Bolen/BiblePlaces.com.

During construction work to repair a large water pipe south of Jerusalem’s Temple Mount, at the southern end of the ridge known as the City of David, archaeologists Ronny Reich and Eli Shukron identified two ancient stone steps. Further excavation revealed that they were part of a monumental pool from the Second Temple period, the period in which Jesus lived. The structure Reich and Shukron discovered was 225 feet long, with corners that are slightly greater than 90 degrees, indicating a trapezoidal shape, with the widening end oriented toward Tyropoeon valley.

The Siloam Pool is adjacent to the area in the ancient City of David known as the King’s Garden and is just southeast of the remains of the fifth-century church and pool traditionally believed to be the sacred Christian site. 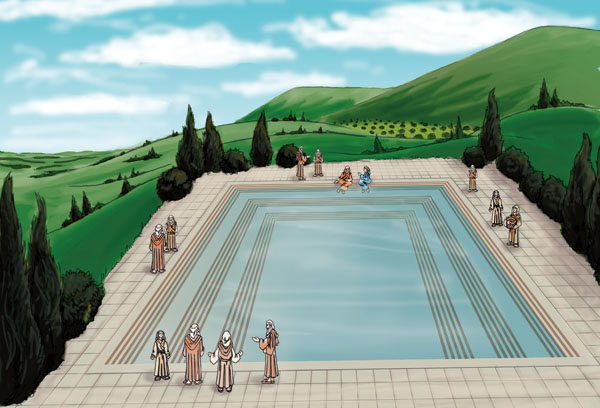 What was the function of the Siloam Pool during Jesus’ time? Because the pool is fed by waters from the Gihon Spring, located in the Kidron Valley,  the naturally flowing spring water would have qualified the pool for use as a mikveh for ritual bathing. However, it could also have been an important source of fresh water for the inhabitants on that part of the city. One scholar has even suggested that it was a Roman-style swimming pool.

Whatever its original purpose, the Siloam Pool where Jesus healed the blind man is an important Christian site, and its discovery represents a watershed moment in the field of Biblical archaeology.

As with many sites in the Holy Land, the origins of the Siloam Pool reach back even further in history—at least seven centuries before the time of Jesus. Judah’s King Hezekiah (late eighth century B.C.) correctly anticipated a siege against Jerusalem by the Assyrian monarch Sennacherib.

To protect the city’s water supply during the siege, Hezekiah undertook a strategic engineering project that would be an impressive feat in any age: He ordered the digging of a 1,750-foot tunnel under the City of David to bring water from the Gihon Spring, which lay outside the city wall, inside the city to a pool on the opposite side of the ridge. In the years that followed, “Hezekiah’s Tunnel” continued to carry fresh water to this section of Jerusalem, and different pools were built here over the centuries, including the Second Temple pool that Jesus knew.

This Bible History Daily feature was originally published in May 2011.