When did the biblical story take place? Joseph overseeing the gathering of grain during the seven years of plenty (Genesis 41:47–48). Dating to about 1275, this mosaic appears in a cupola in the atrium of St. Mark’s Basilica in Venice. Interestingly, the artist made Joseph’s granaries to look like pyramids. Wikimedia Commons; public domain.

The biblical figure of Joseph offers one of the most fascinating narratives of the Hebrew Bible. Genesis 37–50 tells the intricate and adventurous story that begins with Joseph portrayed as the favorite son of Jacob. Joseph’s special status angers his brothers, who sell him into slavery—to either Ishmaelites or Midianites, who then bring him to Egypt. There Joseph gains the favor of Pharaoh, is promoted into the highest office, and acquires grain supplies that eventually save Egypt during a famine. When his starving brothers come from Canaan to Egypt, Joseph allows their entire households to settle in a region called Goshen. The Hebrews then live in Egypt and multiply for 400 years (Exodus 12:40), before escaping back to Canaan. 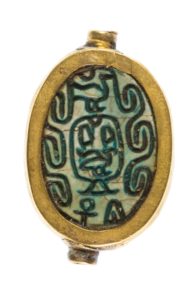 Are these action-packed stories from Genesis credible? Is there any independent historical evidence that Joseph ever existed? You guessed it—we don’t know of any evidence for Joseph outside the Bible. Like other patriarchal narratives, Joseph’s story seems impossible to pin down historically. Or does it?

What if instead of looking for the historical Joseph, we examine our sources for the broader historical period in which the biblical story could have been set? Can we identify the historical background and perhaps find the actual setting in which a story like the one recounted in the Book of Genesis could have occurred?

In her article “Does Archaeology Confirm Joseph’s Time in Egypt?” published in the Fall 2021 issue of Biblical Archaeology Review, Rachel Hallote looks at Joseph’s story from an historical perspective. A professor of history at Purchase College of the State University of New York, Hallote examines the archaeological record from different periods of Egyptian history and tries to anchor the biblical story in reliable historical and archaeological sources. Looking for a plausible historical setting, Hallote points to the fact that from the early second millennium B.C.E. people from Canaan were infiltrating the northeastern regions of Egypt. “In the period known as the Second Intermediate Period [c. 1750–1550 B.C.E.], Canaanites who had been living in the region had expanded and taken over much of the eastern Nile Delta, essentially conquering Egypt from within. Egyptian texts refer to them as heqau khasut, which means “rulers of foreign lands,” a term [later] corrupted into Hyksos,” explains Hallote. This golden diadem featuring heads of gazelles and a stag with alternating rosettes mixes Egyptian and Levantine artistic traditions. It attests to the power and grandeur of the Hyksos kings.
Photo: Metropolitan Museum of Art, New York; Purchase, Lila Acheson Wallace Gift,1968.

Building on archaeological evidence from the eastern Nile Delta, Hallote affirms that the Hyksos were Canaanites. So should we see in the Hyksos the proto-Hebrews of the Bible? The biblical storyline does, indeed, align with the Egyptian sources for the Hyksos: people originating in Canaan come to Egypt, gain in prominence, and finally leave for Canaan, being pursued by the Egyptian army. But unlike the historical Hyksos, the biblical Hebrews leave Egypt willingly, even against Pharaoh’s will.

Is it possible that, despite this major difference, the historical reality is somehow reflected in the biblical narrative, which was written down centuries after the events it purports to recount? For the complete argument and to see how it may fit the latest theories about the Exodus, read Rachel Hallote’s article “Does Archaeology Confirm Joseph’s Time in Egypt?” published in the Fall 2021 issue of Biblical Archaeology Review.

——————
Subscribers: Read the full article “Does Archaeology Confirm Joseph’s Time in Egypt?” by Rachel Hallote, in the Fall 2021 issue of Biblical Archaeology Review.

A version of this post first appeared in Bible History Daily in September, 2021