In honor of Ken Dark’s 2020 book we republished this article that first appeared in BHD in 2015 and opened up the full Biblical Archaeology Review article to be read by everyone.

The childhood home of Jesus may have been found underneath the Sisters of Nazareth Convent in Nazareth, Israel, according to archaeologist Ken Dark. 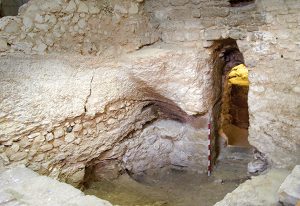 This very well could be the childhood home of Jesus. It doesn’t look inviting, but this rock-hewn courtyard house was quite likely Jesus’ home in Nazareth. The recent excavation by Ken Dark and the Nazareth Archaeological Project revealed good evidence to suggest this is where Jesus was raised. Photo: Ken Dark.

The excavation site located beneath the convent has been known since 1880, but it was never professionally excavated until the Nazareth Archaeological Project began its work in 2006. In “Has Jesus’ Nazareth House Been Found?” in the March/April 2015 issue of BAR, Ken Dark, the director of the Nazareth Archaeological Project, not only describes the remains of the home itself, but explores the evidence that suggests that this is the place where Jesus spent his formative years—or at least the place regarded in the Byzantine period as the childhood home of Jesus.

The excavation revealed a first-century “courtyard house” that was partially hewn from naturally occurring rock and partially constructed with rock-built walls. Many of the home’s original features are still intact, including doors and windows. Also found at the site were tombs, a cistern and, later, a Byzantine church.

The remains combined with the description found in the seventh-century pilgrim account De Locus Sanctis point to the courtyard house found beneath the convent as what may have been regarded as Jesus’ home in Nazareth. Archaeological and geographical evidence from the Church of the Annunciation, the International Marion Center and Mary’s Well come together to suggest that this location may be where Jesus transitioned from boy to man.

Ken Dark also discusses the relationship between the childhood home of Jesus, Nazareth and the important site of Sepphoris. It has been thought that Sepphoris would have provided Joseph with work and Jesus many important cultural experiences. However, Ken Dark believes that Nazareth was a larger town than traditionally understood and was particularly Jewish in its identity—as opposed to the Roman-influenced Sepphoris. This is partially based on the result of his survey of the Nahal Zippori region that separates Sepphoris and Nazareth geographically.

For more on the childhood home of Jesus, read the full article “Has Jesus’ Nazareth House Been Found?”  by Ken Dark in the March/April 2015 issue of Biblical Archaeology Review. The Sisters of Nazareth Convent
A Roman-period, Byzantine, and Crusader site in central Nazareth

Read the full unlocked article “Has Jesus’ Nazareth House Been Found?” by Ken Dark in the March/April 2015 issue of Biblical Archaeology Review.

The Pools of Sepphoris: Ritual Baths or Bathtubs? Yes, They Are.

Spotlight on Sepphoris: How Jewish Was Sepphoris in Jesus’ Time?

A version of this Bible History Daily article was originally published in March 2015.