A look at Laodicea’s “lukewarm” legacy from Revelation 3:15–16

Why does the author of the Book of Revelation call the church of Laodicea “lukewarm”?

The church of Laodicea is the last of seven churches addressed in Revelation. This harsh pronouncement suggests that the Christians at Laodicea—located in modern Turkey—wavered in their commitments to the Christian faith. The historical and archaeological context of this situation is worth investigating.

Laodicea was a wealthy city during the Roman period. Not only was Laodicea located on major trade routes that connected it to important cities like Ephesus, Smyrna and Sardis, but also it was a center of textile production and banking. Perhaps not surprisingly, the church of Laodicea is noted as being wealthy in the Bible (see Revelation 3:17).

The Book of Revelation was penned during the Roman emperor Domitian’s reign (r. 81–96 C.E.). Domitian was notorious for being the first Roman emperor who declared himself a god while still alive. This affronted Christians, Jews and the Roman Senate alike. Other emperors were deified only after their death. 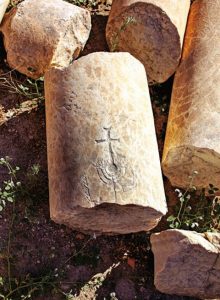 Etched into this broken column fragment are four religious symbols: a menorah, lulav (palm branch), shofar (ram’s horn) and cross. The first three symbols are Jewish, but the cross is distinctly Christian. The column originally belonged to a nymphaeum (a public fountain) in Laodicea. The Jewish symbols were likely added to the column in the late Roman or early Byzantine period, and the cross was added in the early Byzantine period. That the Christian cross extends from the Jewish menorah suggests that the Laodicean church grew out of the synagogue. Photo: © Mark R. Fairchild, Huntington University.

Domitian persecuted those who would not participate in the imperial cult (the worship of emperors and dynastic families). Although Jews were exempt from participating, Christians were not. Fairchild explains, “As part of the Pax Romana, the staunchly monotheistic Jews in the cities of the Mediterranean world were exempt from the requirements of emperor worship. As long as Christianity was considered a sect within Judaism, the Christians in these cities were likewise exempt from emperor worship.” At first, the Christian Church was composed almost entirely of Jews. However, as more Gentiles (non-Jews) converted to Christianity, the percentage of Jewish people in the Christian Church decreased, and, therefore, Christians’ special status as Jewish monotheists, which permitted them to refrain from emperor worship, was removed.

The Christians at Laodicea were affected by Domitian’s decrees. Their response to this persecution—which even involved their ability to buy and sell—is what causes the author of Revelation to call them “lukewarm.” Fairchild elaborates:

The difficulties that this placed upon the Christians of Asia were expressed in detail throughout the Book of Revelation. Those who refused to worship the image of the beast (the emperor) were killed. Christians could no longer buy or sell unless they had taken the mark of the beast (Revelation 13). The pressure upon rich Christians to maintain their wealth was intense. Since a great deal of Laodicea’s wealth depended upon trade, the Christian merchants were in a quandary. Would they cooperate with the imperial cult and maintain their trade associations, or would they forswear Domitian and reaffirm their faith in Christ? Many of the Laodicean Christians compromised their faith in such ways that the writer of the apocalypse could say, “I will spit you out of my mouth” (Revelation 3:16).

Other churches throughout the Roman Empire responded differently. For example, the Christians at Smyrna are applauded in the Book of Revelation for maintaining their faith in the midst of extreme difficulty by refusing to participate in the imperial cult—even though this meant affliction and poverty for them (see Revelation 2:9).

Yet the Laodicean church’s “lukewarm” legacy was not its final legacy.

The church at Laodicea survived Domitian’s reign. The city became a bishopric (seat of a Christian bishop), and a Christian council was even held there in the fourth century C.E. Archaeologists have discovered about 20 ancient Christian chapels and churches at the site. The largest church at Laodicea, called the Church of Laodicea took up an entire city block and dates to the beginning of the fourth century. 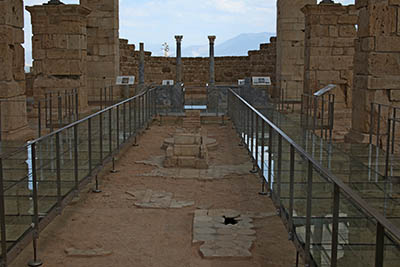 Laodicea remained an important city until the seventh century C.E. when it was struck by a devastating earthquake and subsequently abandoned.

To learn more about the church of Laodicea in the Bible and the recent archaeological excavations at the site, read “Laodicea’s ‘Lukewarm’ Legacy: Conflicts of Prosperity in an Ancient Christian City” by Mark R. Fairchild in the March/April 2017 issue of Biblical Archaeology Review.

——————
BAS Library Members: Read the full article “Laodicea’s ‘Lukewarm’ Legacy: Conflicts of Prosperity in an Ancient Christian City,” by Mark R. Fairchild in the March/April 2017 issue of Biblical Archaeology Review. Not a BAS Library or All-Access Member yet? Join today.

This Bible History Daily feature was originally published on March 6, 2017.