Where is biblical Bethsaida? Five factors for finding the hometown of the apostles

Bethsaida appears seven times in the Bible. Jesus performed miracles there (e.g., Matthew 11:21; Mark 8:22), and it was the hometown of the apostles Peter, Andrew, and Philip (John 1:44). All of the biblical references situate Bethsaida by the Sea of Galilee. 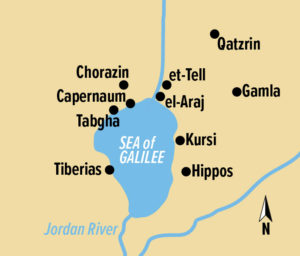 The sites of el-Araj and et-Tell are both candidates for Bethsaida. Map: Biblical Archaeology Society.

Around 30 C.E., Herod Philip, the son of Herod the Great who governed the area, transformed this fishing village into a city (polis). Josephus reports that Herod Philip renamed the site Julias and increased its population and “grandeur” (Josephus, Jewish Antiquities 18.28). The city lasted for several centuries before disappearing from the historical record.

Even though Bethsaida is a significant biblical site, we don’t know its exact location. In fact, two archaeological sites—et-Tell and el-Araj—are contenders for biblical Bethsaida.
Both are being excavated by reputable teams of archaeologists and biblical scholars, and both teams are confident that they have found the real Bethsaida-Julias.

In the Spring 2020 issue, Biblical Archaeology Review plunges into the great Bethsaida debate and presents articles on el-Araj and et-Tell. Read “Searching for Bethsaida: The Case for El-Araj” by R. Steven Notley and Mordechai Aviam, directors of the el-Araj Excavation Project, and “Searching for Bethsaida: The Case for Et-Tell” by Rami Arav, who directs excavations at et-Tell. The authors make compelling cases for why their own site is Bethsaida, where Jesus walked in the Bible. So, which site is the better candidate? Based on textual sources, here are five factors you would expect for biblical Bethsaida:

(1) It should be a settlement near the Sea of Galilee’s northeastern shore.

(2) It should have existed as a village during the early first century C.E. (and probably before).

(3) It should show evidence of a fishing industry.

(4) It should have been transformed into a larger settlement—a city (polis)—around 30 C.E.

(5) It should have been inhabited into the third century.

How do el-Araj and et-Tell measure up to these criteria? A variety of fishing implements, such as lead fishing weights, have been found at both sites. Fishing was clearly an important industry at el-Araj and et-Tell. The Bible lists Bethsaida as the hometown of the fishermen-turned-apostles Peter, Andrew, and Philip, and early rabbinic sources also talk about Bethsaida-Julias’s fishing industry.

Both sites also show evidence of “grandeur”—to quote Josephus (Jewish Antiquities 18.28)—to be expected of a village transformed into a significant city (polis) around 30 C.E. Among other discoveries, the excavators of el-Araj uncovered a Roman bathhouse, and at et-Tell, they found a temple dedicated to the Roman imperial cult. At el-Araj, archaeologists have found many lead weights, which fishermen used to weigh down their nets. Photo: Zachary Wong.

Finally, both sites lasted into the third century, which matches the presence of Bethsaida-Julias in historical and rabbinic literature. Bishop Eusebius of Caesarea mentions the site still in the early fourth century. However, since he adds no new information about the city and only repeats what was known from first-century accounts, Notley and Aviam think Bethsaida-Julias had already been vacated by his time: “It seems that by the end of the third century C.E., the hometown of the apostles had been abandoned.” The inhabitants of el-Araj seem to have deserted the site before the fourth century, and the inhabitants of et-Tell left during the fourth century, after an earthquake hit the area.

So, where is biblical Bethsaida: et-Tell or el-Araj? According to the interpretations of the sites’ directors, both sites meet the above five criteria, which makes it hard to tell definitively at this point. Future excavation seasons will undoubtedly uncover more data to create a fuller profile of each site during the first century C.E., which in turn might provide a conclusive answer.

Where Is Biblical Bethsaida? The ancient village of Bethsaida frequently mentioned in the Gospels is believed to be located on the northern shore of the Sea of Galilee, but where precisely the abandoned city lies remains a fiercely-debated question among scholars.

Archaeologists Say They May Have Found the Church of the Apostles at el-Araj According to the Gospels, Bethsaida is a small fishing village on the banks of the Sea of Galilee often mentioned as the location of some of Jesus’ most well-known miracles.