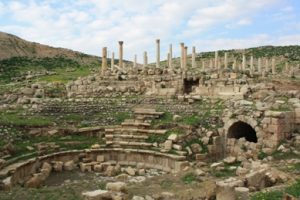 Mark Wilson describes a visit to Pella, an ancient city located in the Perean foothills of the Jordan River where Jesus’ followers sought refuge while escaping Jerusalem’s destruction.

Before writing my doctoral thesis two decades ago, the only Pella that I knew about was a small town in south central Iowa famous for its windows and doors. But in the course of my research, I discovered fascinating data about another Pella located in the Perean foothills of the Jordan River. In March [2012] I finally had the opportunity to visit the Pella located in northwestern Jordan.

Jesus, while looking over the temple mount in Jerusalem shortly before his death, prophesied that its beautiful stones would be thrown down within a generation. He warned that the residents should flee Jerusalem to the mountains when they saw the Roman armies surrounding the city. Jesus’ admonition is found in each of the Synoptic Gospels (Matthew 24:15–22; Mark 13:14–20; Luke 21:20–24). Perhaps Jesus visited Pella during his visit to the Decapolis (Mark 7:31) and Perea (Matthew 19:1; Mark 10:1), and recalling its secure location, cryptically referred to it in this prophecy. Eusebius’s Church History (3.5.3) recounts that the Jewish followers of Jesus heeded his warning and fled to Pella for safety before Jerusalem’s destruction. Birgil Pixner believes that, after the city’s destruction, they returned to Jerusalem to rebuild their Jewish-Christian synagogue on Mount Zion.* Today, Pella sits outside Tabaqat Fahl, twenty miles south of the Sea of Galilee. I was eager to see the geographical setting of the site to find out whether it qualified as a mountainous retreat. The University of Sydney has been conducting excavations at Pella since 1979. Remains from the Natufian through the Islamic period have been discovered – a period spanning over 10,000 years. But my interest was on structures that would have existed in the late first century C.E. However, few Roman buildings from that period remain because massive construction projects in the Byzantine period destroyed them. However, there are remnants of a Roman odeon, bathhouse and necropolis. Roman milestones found in the nearby hills show that roads directly connected Pella was with the important Decapolis city of Gerasa, modern Jerash.

Some scholars believe that the escape of the women’s offspring into the wilderness in Revelation 12:6, 14–17 uses mythological language to describe the flight of the Jerusalem church to Pella. While Revelation 12 is difficult to interpret, there does seem to be a historical basis for the events it describes. The dragon’s attempt to destroy the Jewish Christians, first in Zealot-controlled Jerusalem, and then while crossing the Jordan during the winter floods, came to naught. Instead, the Gentile churches of the Decapolis rescued and aided the Jewish-Christian refugees. With the Jerusalem church safe, the dragon next gave his attention to making war against the rest of the saints (12:17). While a bit fanciful, such a reconstruction must be taken into consideration, since others have little to commend them.

Although Pella is only in the foothills of the Transjordanian Mountains, the site seems to fulfill Jesus’ prophecy of a city of refuge. Standing in the upper basilica, the view across the Jordan Valley is spectacular. Mount Gilgal rises to the northwest, Beth-Shean/Scythopolis looms on the northeast. It was easy to imagine a weary company of refugees arriving in this city in the late 60s while attempting to survive the chaos falling upon Jerusalem.

Interestingly, the Pella in Iowa was founded in 1847 by 800 Dutch immigrants seeking religious freedom. Their minister Dominee Hendrik P. Scholte knew his church history and decided to name the new city after its Perean counterpart. Pella, old and new, still stands as a symbol of refuge and hope in a time of great crisis.

Mark Wilson is the director of the Asia Minor Research Center in Antalya, Turkey, and is the host for BAS’s tours of Turkey. Mark received his doctorate in Biblical studies from the University of South Africa (Pretoria), where he serves as a research fellow in Biblical archaeology. He is currently Visiting Professor of Early Christianity at Regent University and Associate Professor Extraordinary of New Testament at Stellenbosch University. He leads field studies in Turkey and the eastern Mediterranean for university, seminary and church groups. He is the author of Biblical Turkey: A Guide to the Jewish and Christian Sites of Asia Minor and Victory through the Lamb: A Guide to Revelation in Plain Language. He is a frequent lecturer at BAS’s Bible Fests.

* In the article “Church of the Apostles Found on Mt. Zion”, Bargil Pixner writes “The Judeo-Christian community in Jerusalem escaped this terrible catastrophe by fleeing to Pella in Transjordan and the countryside of Gilean and Bashan in expectation of the Parousia, the second coming of Christ.

When this did not occur and they realized that the time of Jesus’ return was not yet at hand, they decided to go back to Jerusalem to rebuild their sanctuary on the site of the ancient Upper Room—where the Last Supper had been held, where the apostles returned after witnessing Jesus’ ascension on the Mount of Olives and where Peter delivered his Pentecost sermon as recorded in Acts 2. It was this site on which they made their synagogue. They were free to do this because they enjoyed a certain religious freedom from the Romans (religio licita) inasmuch as they were Jews who confessed Jesus as their Messiah, and not gentile converts.”

Read “Church of the Apostles Found on Mt. Zion” as it appeared in Biblical Archaeology Review, May/June 1990.

This post originally appeared in Bible History Daily in July, 2012