Using letter order in the ancient Hebrew alphabet for clues 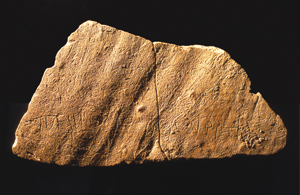 The Izbet Sartah Abecedary (12th century B.C.E.), which reads left to right, reverses the ordinary order of the letters ayin (o) and pe (p). This and other ancient abecedaries shed light on the date of some of the Book of Psalms. Photo: Collection of Israel Antiquities Authority/© The Israel Museum, Jerusalem.

Hebrew language scholar Robert Alter once called the dating of individual psalms “a region of treacherous scholarly quicksand.” While many of the 150 psalms that make up the Book of Psalms include superscriptions attributing them to “David” or other individuals, these should not be taken as reflections of authorship, but rather that the psalms were dedicated to that person or connected to their life. In his article “Can Archaeology Help Date the Psalms?” in the July/August 2012 issue of Biblical Archaeology Review, Mitchell First escapes the chronological quicksand with a unique approach: He compares ancient abecedaries to the Book of Psalms for another perspective on letter order in the ancient Hebrew alphabet.

An abecedary (or abecedarium) is an inscription of the alphabet without any additional text. In the BAR article “What’s the Oldest Hebrew Inscription?” Christopher Rollston investigates two abecedaries (or abecedaria)—the Izebet Sartah abecedary and the Tel Zayit abecedary—as contenders for the distinction. Mitchell First compares the letter order on these abecedaries to the Book of Psalms in his BAR article. 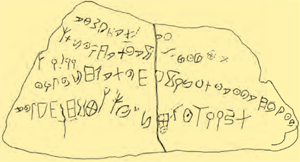 The alphabet as inscribed on the Izbet Sartah Abecedary. Photo: F.M. Cross.

The Book of Psalms is traditionally divided into five books. There is a scholarly consensus that the first three books are the earlier collections, with the first as the earliest and the fifth, which refers to the Babylonian exile, as the final. Many of the psalms are written as acrostics, with successive verses beginning with successive letters of the alphabet. Yet the letter order of the acrostics in the Book of Psalms is not consistent. Is this a textual error, or is it a chronological cue pointing to developments in the ancient Hebrew alphabet?

Alphabets generally follow a set order; a comes before b, aleph comes before beth, etc. In the middle of the Hebrew alphabet, ayin comes before pe.” In the 12th-10th century B.C.E. Izbet Sartah and Tel Zayit abecedaries, the order of these letters is reversed—the pe comes before the ayin.

The acrostics of the first Book of Psalms repeat the ancient Hebrew alphabet four times, at Psalms 9-10, 25, 34 and 37. Mitchell First makes some interesting discoveries about the order of the Psalms:

Let us look closely at Psalm 34. When we do, it becomes obvious that the psalm’s original acrostic was written with a pe/ayin sequence:

“The eyes (עיני/ayin) of the Lord are on the righteous, / and his ears attentive to their cry.”

“The face (פני/pe) of the Lord is set against evildoers, / to erase their names from the earth.”

Yet immediately following this, at 34:18 (English, verse 17), we are told without explanation:

“They cry out (צעקו/tzade) and the Lord hears, and saves them from all their troubles.”

Why should God listen to and save the evildoers, when we have just been told that he wants to erase their remembrance from the earth?

But if we make the assumption that pe preceded ayin here, the theological problem disappears and the sequence of verses makes perfect sense:

34:18: “They cry out (צעקו/tzade) and the Lord hears, and saves them from all their troubles.”

The ones whom God listens to and saves are not the evildoers but the righteous ones!

The likely original pe/ayin order in chapter 34 makes us suspect that the three other acrostics in the first book (= the same collection) might also have been composed with the pe/ayin order. Although this cannot yet be proven, there are strong arguments to support this. For example, in the acrostic that spans chapters 9 and 10, it is fairly clear that our text is corrupt, since the acrostic only includes 15 of the 22 letters. But many scholars believe that the words פיחו/pe (verse 10:7, second word) and עיניו/ayin (verse 10:8, third to last word) were once the first words of pe and ayin verses in the pe/ayin order in the original text.

It is very likely that, during earliest Israelite times, the Hebrew alphabetic order was exclusively pe/ayin, and that this was the order through the end of the First Temple period (c. 1000–586 B.C.E.).

Moreover, the Book of Lamentations, which probably dates very shortly thereafter, also follows the pe/ayin order in its acrostics.

First supports his conclusions with a discussion of an additional text from Kuntillet ‘Ajrud and extends his study of letter order to the fifth book of Psalms in “Can Archaeology Help Date the Psalms?”

This Bible History Daily feature was originally published on July 13, 2012.