An impressive new seal impression has been uncovered in the City of David in Jerusalem. Written in Hebrew, the seal impression (bulla) reads לנתנמלך עבדהמלך—meaning, “(Belonging) to Nathan-Melek, Servant of the King.”

A figure named Nathan-Melek also appears in 2 Kings 23:11. He was one of King Josiah’s court officials, and he participated in the king’s religious reforms. The title “Servant of the King” appears frequently in the Bible to designate a trusted, high-ranking official. While the title “Servant of the King” has been found on other artifacts, this discovery marks the first appearance of the name Nathan-Melek in an inscription from an archaeological context.

Based on its script, Anat Mendel-Geberovich of the Hebrew University of Jerusalem dates the seal impression to the mid-seventh–early sixth century B.C.E. Archaeologists of the Givati Parking Lot Excavations—directed by Yuval Gadot of Tel Aviv University and Dr. Yiftah Shalev of the Israel Antiquities Authority—found the impression within the remains of a public building that was destroyed and burned in the sixth century B.C.E., when the Babylonians sacked Jerusalem. 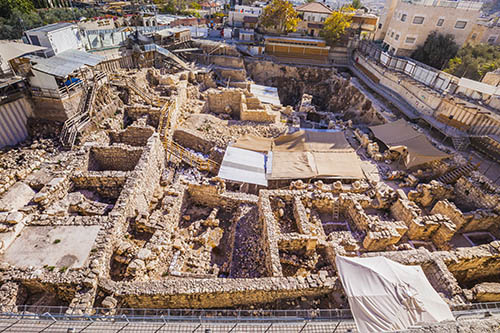 The Givati Parking Lot Excavations in the City of David. Photo: Kobi Harati.

There is no way to know definitively whether or not this seal impression relates to the biblical Nathan-Melek, but it remains an intriguing possibility. Regardless, we can discern that the Nathan-Melek of the impression was a noteworthy figure, since he is recognizable by his first name and title alone—without his family lineage. He was clearly well-known in his day.