From Solomon’s Temple to the Jesus Boat, the Biblical world was built of cedar 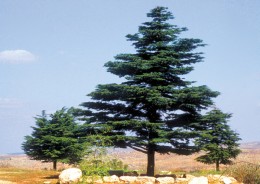 The famous Lebanese cedar tree was widely used in the construction of ancient temples, palaces and seagoing vessels, including Solomon’s Temple and the so-called “Jesus Boat.” But what exactly made its timbers so important for ancient woodworking?

In the biblical world, Lebanese cedar (Cedrus libani) trees were highly sought after as an excellent source of timber for ancient woodworking. The wood’s high quality, pleasant scent and resistance to both rot and insects made it a popular building material for temples, palaces and seagoing vessels, from Solomon’s famed Temple to the so-called “Jesus Boat” of the first century C.E. Today, Lebanese cedar trees grow mostly in Lebanon and southern Turkey, with a few found in Cyprus and Syria. As the Bible makes clear, the valuable wood had to be imported into ancient Israel.

The Phoenician king Hiram of Tyre sent Lebanese cedar, carpenters and masons to Jerusalem to build a palace for King David (2 Samuel 5:11). Likewise, Hiram provided cedars and artisans to King Solomon for the construction of his own palace as well as the Temple in Jerusalem (2 Chronicles 2:3,7; 1 Kings 5:20). The Bible also informs us that Lebanese cedar timbers were commonly transported by sea. The Book of Ezra reports that timbers were hauled to the Phoenician coast and then sailed to Jaffa for transport to Jerusalem (Ezra 3:7). Though not used by Jesus himself, the so-called “Jesus Boat,” dating to the first century C.E., is very similar to the boats Jesus and his disciples would have used to cross and fish the Sea of Galilee. Analysis showed that at least some of the boat’s reused timbers were made from Lebanese cedar.

Lebanese cedar wood was also popular for ancient woodworking and ship construction because it is easily worked and shaped, it seasons with minimal shrinkage or distortion and it resists decay in salt water better than most types of wood. In the ancient shipwreck off the Uluburun promontory of Turkey, nearly all of the boards of the hull were made of Lebanese cedar. This famous late-14th-century B.C.E. wreck contained a cargo of precious metals, jewelry, ivory, ebony and other valuable materials, suggesting that it was probably a royal shipment.

One of Israel’s best-known shipwrecks also bears evidence of ancient woodworking with cedar timbers. The so-called “Jesus Boat,” dated to the first century and recovered from the Sea of Galilee, was built mostly of reused timbers, some of which were made from Lebanese cedar. While the “Jesus Boat” cannot be linked to the life of Jesus, scholars believe it was the type of boat that was used by Jesus and his disciples in their many travels upon the Sea of Galilee.

——————
To learn more about the many ways Lebanese cedar trees were used in ancient woodworking, read Nili Liphschitz, “Cedars of Lebanon: Exploring the Roots,” in the May/June 2013 issue of Biblical Archaeology Review.

This Bible History Daily feature was originally published in May 2013.

When Al-Aqsa Mosque was reconstructed in the 1930s and 1940s, massive Cedar of Lebanon and cypress beams were reused or removed. Some are much older than the mosque itself. Were they once part of Herod’s Temple Mount architecture? Learn more in Bible History Daily.

BAS Library Members: read the full article “Wooden Beams from Herod’s Temple Mount: Do They Still Exist?” by Peretz Reuven as it appears in the May/June 2013 issue of BAR.