Despite their origin in archaeological looting, the Amarna tablets have proven to be invaluable Biblical artifacts 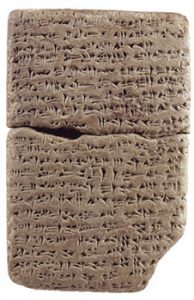 Other scholars reject this view, however. As Swiss Biblical scholar and religious historian Othmar Keel said in an interview with BAR about Bible artifacts found outside an archaeological context, “I don’t think we can write a history of the ancient Near East without relying on unprovenanced material.”* That prompted us to take a look at several unprovenanced Biblical artifacts—all published in BAR—that have contributed significantly to our understanding of the Biblical world.

The Amarna tablets are the perfect example of such important Bible artifacts found without a stratified context, as the result of archaeological looting. In 1887 a Bedouin woman searching among ancient ruins near the Nile River discovered some inscribed clay tablets. This site, located 200 miles south of Cairo, was later named el-Amarna, and the tablets became known as the Amarna tablets or Amarna letters. Bedouin excavated more than 300 of the cuneiform tablets from the site but could not interest scholars in purchasing them. The Amarna tablets were dispersed—some were lost, others broken, but fortunately most ended up in museum collections.

What scholars had initially failed to recognize was that these Bible artifacts found due to archaeological looting were in fact letters from the royal archive of Pharaoh Akhenaten (1353–1337 B.C.), containing records of his father’s (Amenophis III) official correspondence with his various Canaanite vassal rulers. When Akhenaten moved the royal capital from Thebes to the new site of Akhetaten (el-Amarna), he brought with him hundreds of these Amarna tablets inscribed in Akkadian, the diplomatic language of the day.

Despite their origin in archaeological looting, the Amarna tablets, Biblical artifacts found outside a professional excavation, have proven to be invaluable sources for understanding diplomatic relations in the 14th century between Egypt and Canaan, and have added to the archaeological evidence of the various Canaanite cities’ importance, development and settlement patterns prior to the Israelites’ arrival.**