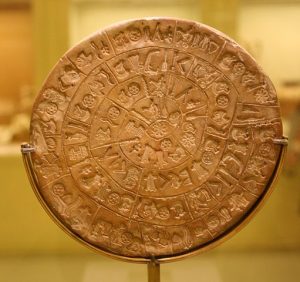 Side A of the Phaistos Disk, which can be seen at the Heraklion Archaeological Museum. Photo: PRA / Wikimedia Commons.

A Bronze Age artifact that has eluded decipherment for over a century has finally been decoded—so claims Gareth Owens, a linguist at the Technological Educational Institute of Crete. In a TEDxHeraklion talk in February 2014, Owens presented a decipherment of the Phaistos Disk, a 3,700-year-old fired clay disk stamped with hundreds of symbols. The disk, according to Owens, is a Minoan prayer to a mother goddess.

Major news outlets, including The Greek Reporter, The Huffington Post and Discovery News, recently covered Owens’s findings with great fanfare. Some Aegean Bronze Age script experts, however, are not convinced by Owens’s methodology and conclusion. This article presents reactions by scholars Thomas G. Palaima and Brent Davis, whose specializations collectively encompass Indo-European linguistics, decipherment theory and Bronze Age art and archaeology. Click on their names to jump down to their respective commentaries.

The Phaistos Disk is about 6 inches in diameter and contains on both sides symbols stamped in a spiral formation. 45 different signs—242 in all—are represented on the disk. The disk was discovered in 1908 in an early second millennium B.C.E. palace at Phaistos on Minoan Crete.

Learn about the magnificent Minoan civilization in “Who Were the Minoans?” and “Minoan Frescoes at Tel Kabri” in Bible History Daily. Side B of the Phaistos Disk. Photo: PRA / Wikimedia Commons.

Since its discovery, scholars have debated the origin, meaning and function of the disk, as well as what its symbols actually say. The disk has been interpreted to be a hymn, a curse and even an almanac.

One major problem with attempting to decipher the signs? There aren’t enough examples to work with. The script stamped on the disk appears nowhere else, but two objects display similar—though not identical—signs: a bronze axe from Arkalokhori in central Crete and a clay seal from Phaistos.

Despite its mysteriousness, the Phaistos Disk is thought to be authentic by many, but not all, scholars.

In a TEDx talk in Heraklion on the Greek island of Crete, Gareth Owens presented a summary of his six-year-long research with collaborator John Coleman, a phonetics specialist at Oxford University, and what they claim to be a decipherment of more than 90% of the signs on the Phaistos Disk. Watch the talk:

Believing the Phaistos Disk signs to be related to the still-undeciphered Minoan Linear A script, and thus ultimately to the Mycenaean Linear B script, Owens and Coleman identified a number of keywords, including I-QE-KU-RJA, interpreted to mean “mother and/or goddess.” The researchers conclude that the Phaistos Disk is a Minoan prayer to the mother goddess.

Concerning critics of his research, Owens, in an email to Bible History Daily, said, “It is perhaps easier to criticise than to offer something new. After 25 years on Crete, and having spent a decade doing a Ph.D. in linguistics on the structure of the Minoan language, and after 6 years on the Disk, I personally will keep trying to improve our work, and I will happily hear better theories with great pleasure.”

Owens added, “Why should the Disk be treated differently as a Cretan syllabic inscription? My Ph.D. demonstrated that Minoan is an independent, insular Indo-European language. The Disk is a genuine Minoan religious inscription in a syllabic script in an IE language, so we must try both to ‘read’ and to try to ‘understand’ the text.”

He and his research team have made their work available online at TEI of Crete – Daidalika “for healthy criticism and subsequent improvement,” Owens said.

1. Thomas G. Palaima, Robert M. Armstrong Centennial Professor and Director of the Program in Aegean Scripts and Prehistory at the University of Texas at Austin:

Regarding Gareth Owens’s proposed decipherment of the Phaistos Disk, my opinion is not a new opinion, but an opinion that has remained valid for over 65 years and is widely shared by many creative, adventurous and hard-working scholars, i.e., scholars who are not part of a hidebound and conservative establishment at which proposers of decipherments often rail, because the data offered by the Phaistos Disk for a decipherment have not changed significantly in all that time.

As more people than ever know now, because of Margalit Fox’s recent excellent general account of work at deciphering the Minoan and Mycenaean scripts of the Aegean area during the 20th and into the 21st century (The Riddle of the Labyrinth, Ecco Press 2013) and a decade earlier Andrew Robinson’s The Man Who Deciphered Linear B (Thames and Hudson 2002), a major figure in analyzing, systematizing and carefully publishing the data and in mastering and controlling many related or pertinent scripts and languages of the third to first millennia B.C.E. was Alice E. Kober (1906–1950). In her magisterial article on the state of research on the Aegean scripts “Minoan Scripts Fact and Theory,” American Journal of Archaeology 52 (1948), pp. 82–103, Kober comments on the Phaisos Disk: “Of Cretan origin until proven otherwise.” She says that articles that give readings of the Phaistos Disk “translate” it, rather than “decipher” it. And she sums up the state of the problem: “For many years after its discovery, the Phaistos Disk was a favorite subject for articles and was ‘translated’ several times. As a matter of fact, very little can be done with it at present.” This still holds true.

Elizabeth Barber in her Archaeological Decipherment: A Handbook (Princeton University Press 1974) says about the Phaistos Disk: “Not only is there not enough statistical information for anyone who claims to have deciphered a script for which only 241 [instances of the 45 distinct] signs of nonalphabetic text are known … to prove his claim, but by the same token there is not enough for anyone else to disprove it.”

What this means is that the data are insufficient for proof or for disproof. Every proposed decipherment, Gareth Owens’s included, fails the standard of ‘probability.’

As with other “translations” of the Phaistos Disk, Owens gives values for the signs and interpretations of the words made up of those signs and of groups of words, without any thorough-going proof of the overall phonology, sound-representational system and grammar and syntax.

2. Brent Davis, Adjunct Professor at the Centre for Classics and Archaeology at the University of Melbourne:

The script on the Phaistos Disk is found on no other object, perhaps apart from the Arkalokhori axe. Thus the corpus of this script is tiny—far too small to be deciphered in any reliable way. Decipherment requires a corpus consisting of thousands and thousands of signs—because only with such a large corpus can we ascertain the meanings of words without guesswork.

What Owens has done is to attempt to “sound out” the signs on the Disk by assigning them the phonetic values of Linear A signs that look somewhat similar. However, Linear A is itself undeciphered; the values of its signs are only tentative, based on their resemblances to Linear B signs. Furthermore, the notion that the Disk and Linear A must encode the same language is an assumption: the Minoans may very well have spoken more than one language, which would make the existence of multiple scripts easier to understand.

Also, the notion that “similarity of form” between signs on the Disk and Linear A signs must mean “similarity of pronunciation” is a serious assumption. The scripts may very well be related (though this can’t yet be proven); but even if they are related, the notion that “similarity of form” means “similarity of pronunciation” is still an assumption. The Cypriot Syllabic script, for example, is clearly part of the same family of scripts as Linear B, with many signs in Cypriot Syllabic resembling signs in Linear B—but most of these signs are pronounced very differently in the two scripts, even though both scripts encode the same language (Greek).

Owens likens the Disk to the Rosetta Stone, but this is far from accurate…if only that were true. The Rosetta Stone contained a text in an undeciphered script (Egyptian Hieroglyphs), as well as a translation of that text into Greek. Such a bilingual document is indeed a huge aid to decipherment, for obvious reasons, but the Disk contains just the undeciphered script—nothing else.

In the end, Owens’s “readings” are based on a stack of unverifiable assumptions; his conclusions are unproven, and unprovable. It’s not surprising, then, that so many scholars of Aegean Bronze Age scripts aren’t accepting them.

Update, November 3, 2014: John G. Younger, Professor of Classics and Academic Director of Jewish Studies at the University of Kansas, has published his response to Owens here: http://people.ku.edu/~jyounger/misc/Owens_response.pdf.