From Strata in the November/December 2014 issue of BAR

They have not uncovered much scientific evidence to date, but they do have an intriguing Assyrian relief, which may explain why a local tradition regards Mt. Cudi as Mt. Ararat. 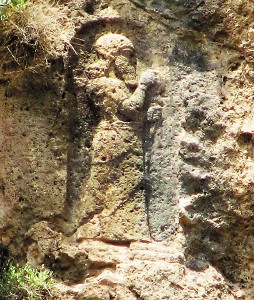 Assyrian relief on the slopes of Mt. Cudi near the Turkish village of Sah. Photo: Courtesy Professor Ibrahim Baz of the University of Sirnak, Turkey.

This photo was taken some months ago on the slopes of Mt. Cudi near the Turkish village of Sah. The figure, who has not yet been identified, dates to a period earlier than Sennacherib (who ruled 705–681 B.C.); there is no accompanying inscription. He has his right hand raised in a gesture of reverence and holds a staff of office in his left hand.

Alan Millard, Emeritus Rankin Professor of Hebrew and Ancient Semitic Languages at the University of Liverpool, offers a possible identification for the figure: Shamshi-ilu. Millard explains that since the figure is not wearing any headdress, as might be expected of an Assyrian king, it is more likely that he represents a powerful prefect, such as Shamshi-ilu, who held sway over much of Northern Syria from c. 780 to 745 B.C. Shamshi-ilu left inscriptions in his own name at Til Barsip (modern Tell Akhmar) on the Euphrates, in which he tells of his victorious campaign against places in southeastern Turkey and the kingdom of Urartu, which would have taken him into the vicinity of Judi Dagh.

Reliefs of Sennacherib were also found on Mt. Cudi and documented by L.W. King, an English archaeologist who taught Assyriology at King’s College in Cambridge and later worked at the British Museum.

Is there any connection between Mt. Cudi and the Genesis flood account—a complex narrative in the Hebrew Bible?1

Genesis 8:4 says that after the flood waters subsided, “the ark came to rest on the mountains of Ararat.” While the Biblical text says “mountains” (plural), therefore referencing a range rather than an individual mountain, many have tried to identify the specific mountain on which Noah’s ark came to rest.

In his book The Ark before Noah: Decoding the Story of the Flood, Irving Finkel of the British Museum discusses three mountains that have flood stories affiliated with them. The first (and most famous) bears the name Mt. Ararat (Agri Dagh). The highest peak in its region, Mt. Ararat is a dormant volcano located in eastern Turkey near the border with Iran and Armenia. The second is Mt. Cudi, and the third is Mt. Nisir (Pir Omar Gudrun), where the ark rested according to the Gilgamesh Epic. A map of the three “Ark Mountains.” Photo: From Irving Finkel, The Ark before Noah: Decoding the Story of the Flood (New York: Nan A. Talese/Doubleday, 2014).

Many expeditions have been launched to hunt for Noah’s ark over the years. While the ark itself remains elusive, we can only hope that more finds like this interesting Assyrian relief continue to surface.

The Search for Noah’s Flood by Ronald S. Hendel

This Bible History Daily feature was originally published on November 26, 2014.