The struggle for the true history of ancient Israel

Credibility of the Hebrew Bible as a source for ancient Israel’s history has been disputed since at least the mid-1970s, when the historicity of the patriarchs of Genesis suffered a serious blow in the works of Thomas L. Thompson and John Van Seters.1 Biblical scholars of the last 35 years or so thus split into two camps of thought: historical minimalism and historical maximalism. The minimalists would argue that most of the Hebrew Bible has little value for the study of history because it is made up of prose fiction, folk tales, legends and theological treatises, while the maximalists would defend the Bible’s claims regarding the early history of ancient Israel.2 In “Whom Do You Believe—The Bible or Archaeology?” in the May/June 2017 issue of Biblical Archaeology Review, eminent archaeologist William G. Dever explores the difficult subject, giving BAR readers a sneak-peak of his upcoming book.

This fragmented stela was excavated at Tel Dan in northern Galilee; it possibly dates to the ninth century B.C.E. Since its discovery in 1993/1994, the highlighted Aramaic letters (bytdwd) have been read as “the House of David” and regarded as confirmation that the Biblical David was a real historical figure. Much less optimistic scholars oppose the suggested interpretation and even question the stela’s authenticity. Photo: The Israel Museum, Jerusalem/Israel Antiquities Authority (photograph by Meidad Suchowolski).

It is fair to acknowledge that Biblical archaeology had failed to deliver the evidence that the founding fathers of the discipline—William F. Albright and George E. Wright—thought it would in support of the Bible as history. But as much as Biblical archaeology fell short of the quest to “prove the Bible,” it helped to show just how misguided those initial expectations from Biblical archaeology were. As a result, many scholars have grown suspicious of the Biblical text, rejecting even the most central narratives of early Bible history, such as the Exodus, the military conquest of Canaan, the existence of the United Monarchy and, most recently, the very historicity of figures such as Saul, David or Solomon.

Aided by new trends in literary studies and coinciding with a more general shift in the European historiography, the skeptical views of historical minimalism seem to dominate especially in Europe. The maximalist views, on the other hand, were able to stand their ground in Israel and the United States, where the public discourse is generally more optimistic about the Bible and the early history of ancient Israel as portrayed in the Hebrew Bible.

The tangled tale of Biblical archaeology as practiced in the USA is best symbolized by two still fairly recent decisions by the American Schools of Oriental Research (ASOR), a leading academic institution devoted to the study of the Near East: ASOR changed the name of its popular journal from Biblical Archaeologist to Near Eastern Archaeology in 1998, and it also decided to separate its annual meetings from those of the Society for Biblical Literature.

Over the years, the discussion between minimalists and maximalists has been characterized by inflamed rhetoric and bitter personal attacks. This is a little more understandable if we acknowledge that the current discourse continues to be fueled by the insertion of moralistic views and matters of faith and even modern political agendas and nationalist sentiments. It is then also less surprising that the skeptical and often hyper-critical approach of the minimalists is labeled as cynical, nihilist and immoral by some maximalists. On the other side, the most radical voices occasionally transcend the minimalist–maximalist debate, calling for the dismissal of the whole of the Biblical studies as we know it because the field is allegedly obsolete and irrelevant to modern society.3 Called the Large Stone Structure, these massive walls excavated in the City of David belong to the original King David’s palace in Jerusalem, affirm many. What is the evidence for this claim? Circumstantial at best, caution others. Photo: Eilat Mazar.

In the core of the minimalist–maximalist conundrum is a question of the Bible as history; in other words, the relevance of the Biblical record for historical reconstructions of the past, namely, of the early history of ancient Israel. The most obvious source of historical data besides the Bible is archaeology—Biblical archaeology, for that matter. So how can this historical discipline contribute to our understanding of Bible history? And how do we work with both Biblical and archaeological evidence to produce a “real” history of ancient Israel? This question remains a source of disagreement among Biblical scholars and historians of the ancient Near East. 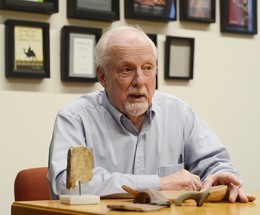 William G. Dever has been the most vocal proponent of so-called historical maximalism in the study of ancient Israel. His attempt to liberate archaeology from its ancillary relationship with the Bible by replacing the term “Biblical archaeology” with “Syro-Palestinian archaeology” did not find fertile ground in popular discourse. Photo: Daily Bruin.

One possibility is to deal with the Biblical texts and archaeological data independently and then look for “convergences,” suggests William G. Dever, Professor Emeritus of Near Eastern Archaeology and Anthropology at the University of Arizona, who is arguably the most influential voice among the maximalists. But it did not escape Dever’s critics that in checking the Bible against material evidence (or vice-versa), archaeology is not speaking for itself. For his approach, Dever has been castigated with others for actually falling into the trap of “proving/disproving the Bible”—an honorable pursuit for some, a methodological trespass for others.

To be sure, Dever understands that both archaeology and the Bible as historical sources have their limits. An experienced archaeologist, Dever rightly points to the chronic cause of disappointment and frustration among Biblical scholars: people have been asking the wrong questions of archaeology!

At the same time—as his critics object—Dever acknowledges the privileged position of archaeological data as being closer to the “real” life and, hence, more reliable for the Bible history than are the Biblical texts, which were written or edited centuries after the supposed events that they relate. And while recognizing that most of the Pentateuch, or Torah, is contaminated by legendary and even fantastic materials, which might disqualify the first four books from historical consideration, Dever with other maximalists also believes that these Bible books are a result of long oral traditions with a real historical core and that history can be distilled from the books immediately following them: Deuteronomy through 2 Kings. Dever’s critics, therefore, point out that his positivist method based on verifiable data is incoherent and circular and that his scholarship actually demonstrates the pitfalls of any attempt to use Biblical archaeology in the quest of uncovering the “true” Bible history. Some critical voices would also question whether Dever’s cautious judgments about the books of Genesis, Exodus, Leviticus and Numbers still qualify as maximalist.

As should be apparent by now, the issues at hand are rather complex. And they are potentially explosive because they transcend the boundaries of academia and can touch on people’s core values and identities.

For William G. Dever’s latest thoughts on this multi-layered and slippery subject, read his article “Whom Do You Believe—The Bible or Archaeology?” in the May/June 2017 issue of Biblical Archaeology Review, where Dever attempts to demonstrate how we can marry archaeology and the Bible in the study of ancient Israel.

——————
BAS Library Members: Read the full article “Whom Do You Believe—The Bible or Archaeology?” by William G. Dever in the May/June 2017 issue of Biblical Archaeology Review.

2. For an open confrontation between scholars of the two camps, read Hershel Shanks, “Face to Face: Biblical Minimalists Meet Their Challengers,” BAR, July/August 1997.