When most people think about the Apostle Paul, they ponder his letters and their place in an evolving new religion.

But today, thanks to archaeologists, there’s more to study when it comes to Paul. How much do you know about the thousands of miles he traveled west of Palestine? What can we learn from archaeology about the cities he visited? What prompted him to linger in Corinth and Ephesus? Why did he choose such a treacherous path through Anatolia? And is it possible that he actually went to Arabia?

Paul did record some of his own experiences, and the Bible and other sources tell us a great deal about traveling conditions in his time. If you’re not familiar with these citations and descriptions, it can be startling to learn the details of the Apostle’s travels.

Imagine walking thousands of miles in all kinds of weather, sometimes on Roman roads but sometimes through mountainous terrain. Imagine the robbers Paul would have had to deal with in the towns he passed through, and the highwaymen along the roads.

And did you know that Roman soldiers were permitted to seize animals, carts, and even people for labor from those they encountered along the roads? Once you begin to understand the challenges the Apostle met, you begin to appreciate more than ever his dedication to his mission, and indeed its importance to Christianity as we know it today.

The work of the Apostle 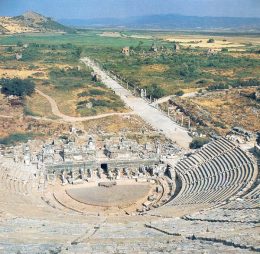 Ephesus, a harbor city across the Aegean Sea from Corinth, proved even more attractive to Paul than had Corinth. He stayed in Ephesus two and one-half years. Photo: F. H. C. Birch/Sonia Halliday Photographs.

It’s fascinating to learn from archaeology about the opportunities and challenges Paul would have faced. Ephesus, for example, today displays archaeological remains that indicate dazzling wealth in Paul’s time. For our studies of Paul, that means he had an opportunity to preach to a huge and diverse audience.

At the same time, discovering that Ephesus was the home of a popular shrine to the goddess Artemis means we now know that Paul would have faced serious opposition to his plans to found a Christian church there.

As we know from one of Paul’s letters to the Corinthians, he relished the battle against adherents of the Artemisian cult. And so he spent far longer in this city than he had almost anywhere else—leaving him the time to potentially write half of the letters that were to become the New Testament scriptures.
If this leaves you with a new appreciation for Paul’s travels, you may be inspired to learn still more. For example, we know from Acts 13 that Paul traveled inland into Anatolia to Antioch—but he did it via a difficult and unusual route to Perga.

What diverted him from the easier routes to Antioch? Modern archaeology may have the answers. Inscriptions on various structural remains indicate the presence of a robust Jewish community in Perga, which would have undoubtedly drawn Paul off the beaten path.

And then there’s the tantalizing reference in Galatians to a trip to “Arabia:” Did he really travel to the Arabia we know today? Jerome Murphy O’Conner believes he uncovered the answer in ancient texts. “Arabia” to Paul would have been the land of the Nabateans, in what is modern-day Jordan, not Arabia as defined today.

If these details of Paul’s journeys intrigue you, you’re not alone. There’s much more to Biblical history than most people realize, but if you want to go deeper, there is a resource available to you.

To read about new theories, discoveries and even great scholarly debates, you can turn to the Biblical Archaeological Society’s renowned library, including the Special Collection on Paul’s Journeys.

Every new discovery, every new interpretation is detailed in this BAS Library Special Collection. You can read all of these eye-opening articles and more from the pages of Biblical Archaeology Review and Bible Review: