As a Mediterranean port city, ancient Ashkelon saw many peoples pass through it. Canaanites, Philistines, Phoenicians, Greeks, Romans and Crusaders were just some of those who walked its streets. The objects they left behind tell an incredible story of these peoples’ ingenuity, strength, entrepreneurship, creativity and determination. 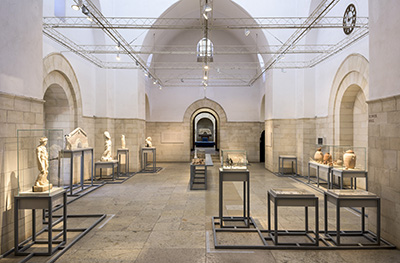 Ashkelon: A Retrospective. 30 Years of the Leon Levy Expedition on display at the Rockefeller Archaeological Museum in Jerusalem. Photo: Elie Posner

Through August 5, 2017, you can see their story at the Israel Museum, Jerusalem exhibit Ashkelon: A Retrospective. 30 Years of the Leon Levy Expedition, which is currently on display at the Rockefeller Archaeological Museum in Jerusalem. Curated by Fawzi Ibrahim, Nurith Goshen and Daniel M. Master, the exhibit walks visitors through the ancient site. The Leon Levy Expedition to Ashkelon has been excavating the site of Ashkelon since 1985; its final season was 2016. The exhibit features many items from its excavations, along with discoveries from other excavations at Ashkelon from the last two centuries.

Philistine Cemetery Unearthed at Ashkelon
The Philistine Marketplace at Ashkelon
Where Did the Philistines Come From?
Adornment in the Southern Levant by Josephine Verduci
Iron Age Gate and Fortifications Uncovered at Philistine Gath
The “Philistines” to the North