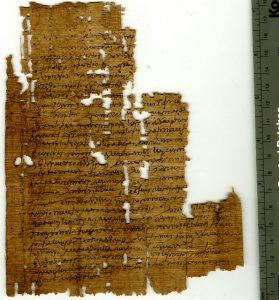 This third-century contract offered several thousand drachmas for a wrestler to intentionally lose his match.

Ancient sports were no joke. The Olympics were some of most important and sacred festivals in the ancient world. And ancient combat sports were brutal displays of technical skill. Or at least, that was true some of the time. A recently translated document reveals that some ancient athletes—like some of their modern counterparts—sacrificed their integrity for the sake of a good show, or swindled audiences for the sake of a bribe.

King’s College London professor Dominic Rathbone recently translated a contract stating that Demetrius would earn three thousand eight hundred drachmas of silver if “when competing in the competition … [Demetrius will] fall three times and yield.” According to a recent article in LiveScience, even if the judge recognized that the match was fixed, Demetrius would still be paid. However, the contract, written by the father of Nicantinous, states that if Demetrius does not throw the match, then “you are of necessity to pay as penalty to my [same] son on account of wrongdoing three talents of silver of old coinage without any delay or inventive argument.” Unlike boxing and pancratium, a wrestling match typically did not end with submission or incapacitation, but rather with one competitor achieving technical mastery over his opponent. The ancients admired wrestling for the level of skill and science it required. Homer’s Odysseus is the archetypal clever wrestler who deflects and neutralizes the massive strength of a far larger man (Ajax) in Book 23 of the Iliad. A statue honoring one Aristodamus of Elis for his victory at Olympia in 388 B.C.E. is inscribed with text reading, “I did not win by virtue of the size of my body, but by my technique.” In the Laws, Plato praised wrestling as a form of exercise well suited for the training of Athens’s youth. Plutarch referred to the sport as “the most technical and the trickiest,” and a surviving section of first- or second-century C.E. wrestling manual shows how well developed the drills for tactics and counter tactics were.

To gain a fall, the Greek wrestler had to take his opponent down, making the man’s back or shoulders touch the ground or stretching him out prone. Three falls were necessary to win a contest. Not every fall was clear. Greek literature sometimes refers to disputes over whether a fall occurred. The tactics depicted in Greek art suggest that very forceful holds and throws were common. Vase paintings and sculpture show headlocks and hip throws, shoulder throws and body lifts, including the reverse body lift that the formidable Russian wrestler Aleksander Karelin has used with such devastating effect in recent Olympiads. If a fall did not result from a wrestler’s being thrown on his back, action would continue on the ground. Joints could be forced against their normal range of movement, and sculptures show a variety of arm bars and shoulder locks that would be illegal in modern Olympic wrestling.

The struggle was likely to be bitter and intense, however sophisticated the tactics. Greek sources are quite clear that choking an opponent into submission, though apparently uncommon, could result in a legitimate fall. The great British historian of ancient sport E.N. Gardiner (1864-1930) may have written that “Wrestling, at all events in the early days before it was corrupted by professionalism, was free from all suggestions of that brutality which has often brought discredit on one of the noblest of sports,” but the evidence proves otherwise. A recently discovered inscription from Olympia records a judges’ decree passed in the late sixth century B.C.E. forbidding wrestlers to break each other’s fingers and empowering the judges to flog athletes who disobeyed the rule. Nevertheless, Leontiskos of Messene won the Olympic crown in wrestling in both 456 and 452 B.C.E. by using this tactic.

Click here to read more about the rigged contract in LiveScience.

Interested in the classical world? The acropolis in Athens is the most iconic remnant of the classical Greek world. Discover the site’s history and architecture in the article Antiquity’s High Holy Place: The Athenian Acropolis by Harrison Eiteljorg, now available online for free.