In a land flowing with milk and honey, what did people eat and drink in Roman Palestine? What kinds of food made up the ancient Jewish diet?

Susan Weingarten guides readers through a menu of the first millennium C.E. in her article “Biblical Archaeology 101: The Ancient Diet of Roman Palestine,” published in the March/April 2019 issue of Biblical Archaeology Review. Although it is difficult to reconstruct the diet of the average person in Palestine during the Roman and Late Antique periods, Weingarten, as both a food historian and an archaeologist, is well equipped for the task. Using archaeological remains and ancient texts, such as the Mishnah, Tosefta, and Talmuds, she pieces together the ancient Jewish diet. 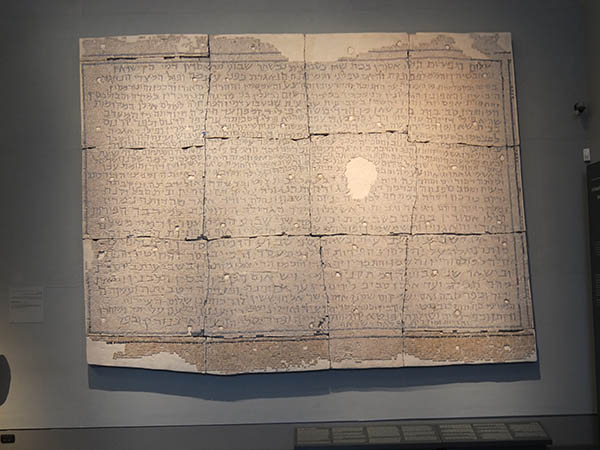 This mosaic inscription quotes a passage from the Talmud, which details plants that can and cannot be grown during the sabbatical year. These plants, including vegetables, fruits, and pulses, were part of the ancient Jewish diet. Found on the floor of a Late Antique synagogue at Rehov, this inscription is now on display at the Israel Museum of Jerusalem. Photo: Davidbena/CC-by-SA-4.0.

A passage of the Mishnah details the minimum diet for a woman, who is separated from her husband: “Not less than two qabs of wheat or four qabs of barley [a week] … He must also give her half a qab of pulse and half a log of oil and a qab of dried figs or a mina of fig-cake, and if he has none of these, he must give her other produce instead.” This passage shows that the ancient Jewish diet included grains, pulses (e.g., beans, peas, chickpeas, and lentils), oil, and figs. Weingarten explains that the quantities of food described here are small:

A qab (meaning “measure”) is equivalent to 4 logs, and 1 log equals the contents of six eggs. It should be clear from this that the half log of oil, for example, equivalent in the Mishnah to the contents of three eggs, is very little indeed. The calories in this diet would barely suffice, and the woman would have had to grind the flour and bake the bread herself.

From this passage, we also see that grains comprise the majority of the woman’s food. In fact, scholars estimate that bread made up 50–75 percent of the average person’s diet. It was the food staple of the ancient world.

People also ate fish in a variety of forms—fresh, dried, salted, and smoked. Meat itself was a rare luxury—so much so that meat found on the street was eaten. As Weingarten explains:

The Mishnah even discusses whether people need to look for the owner of goods found lying in the street, or whether finders could be keepers. It rules that unidentifiable goods, such as “scattered fruit, scattered money, cakes of figs, bakers’ loaves, strings of fish, pieces of meat,” belong to the finder. In other words, people were sometimes so poor that they were prepared to eat meat picked up off the ground, which was unlikely to be fresh—but clearly too valuable to be thrown out.

Additionally, the ancient Jewish diet included locusts, eggs, vegetables, pulses, fruit, and olive oil. People would season their food with herbs and spices, such as dill (anise), cumin, and mustard. Showing an ancient Egyptian woman as she grinds grain, this figurine measures about 11 by 18 inches and dates to 2465–2323 B.C.E.  Two millennia later, this method—using a saddle quern to grind grain into flour—had been mostly replaced by newer methods, except in small villages. Made from flour, bread was a staple of the ancient Egyptian diet and the ancient Jewish diet. Photo: Marcus Cyron/CC-BY-3.0.

Since clean water was hard to come by, people would sometimes mix water and wine together. The natural antiseptic properties of the wine would kill some of the bacteria in the water, thereby making it safer to drink. However, not everyone had access to wine. Weingarten notes that in the Mishnaic passage prescribing food for a woman separated from her husband, “wine was not included in the minimum diet … The Tosefta reports that a woman ‘has no claim for wine, for the wives of the poor do not drink wine.’” Accordingly, wine seems to have been a more common drink among the wealthy.

This Bible History Daily feature was originally published in April 2019.