This post was originally published on Professor Schiffman’s website as the second part of a series of articles on schisms in Jewish history. Bible History Daily republished this article with the consent of the author. Visit lawrenceschiffman.com for print and multimedia resources on the Dead Sea Scrolls, the Babylonian Talmud, Jesus, Hellenism, Christianity and more.

There is considerable scholarly controversy regarding the date of the Samaritan schism. Although some seek to identify the origins of the Samaritans in the Hellenistic period, their beginnings should be traced back to the 6th century B.C.E. When the Assyrians destroyed the Northern Kingdom of Israel in 722, they exiled the upper crust of society in order to deprive the country of its leadership. At the same time, as they did elsewhere, they brought in foreign elements in order to create a mixed population unlikely to unify and revolt. These new elements eventually mixed with the native population and together they evolved a syncretistic form of Israelite worship. 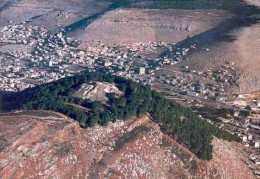 When the Judeans returned to rebuild the Temple in about 520 B.C.E., the Samaritans, identifying with the Judeans, offered to help in the endeavor. The Judeans rejected the Samaritans because of their questionable Jewish descent and their syncretistic cult. As a result, long centuries of hostility began. The Samaritans constantly attempted to block the rebuilding of Jerusalem by appealing to Persian authorities.

Explore the Scholar’s Study “Dating of the Samaritan Temple on Mt. Gerizim” in Bible History Daily.

This view is enshrined in the post-Talmudic tractate Kutim which simply appropriates laws regarding non-Jews and applies them to the Samaritans, substituting the word kuti, meaning Samaritan, for goy, non-Jew. In fact, kuti became practically synonymous with non-Jew, leading to its use by Christian censors as a substitute for goy in Hebrew printed texts.

In the case of the Samaritan schism, certainly by tannaitic times, Jews would not marry Samaritans, since they were of a doubtful status. At some point, probably in the Middle Ages, Samaritans were forbidden to marry Jews. These two groups saw themselves as independent religious communities, acknowledging only their historical connections. The rise of the modern State of Israel has ameliorated the social aspects of this conflict, but Jews are still forbidden to marry Samaritans. Some Samaritans permit marriage to Jewish women, but this leniency came about only recently, since their population shrank to a dangerously low number that threatened their survival. Clearly, Jews and Samaritans separated permanently, and the prohibition of marriage between these two communities was a natural result.

What does urban anthropology tell us about the capitals of Israel and Judah? Learn more about the administrative and regal-ritual cities in “Ancient Samaria and Jerusalem” by Jill Katz.