Democracy we associate with the modern West and ancient Athens, but little in between

Learn the origins of democracy in James Sickinger’s article “Origins: …And by the People” from the January/February 2001 issue of Archaeology Odyssey.—Ed.

Origins: …And by the People

Democracy we associate with the modern West and ancient Athens, but little in between Every four years millions of Americans, many of them united by little other than their shared citizenship, flock to schools, churches and other polling places to cast their ballots for our next president. On no other occasion do all Americans have the opportunity to vote for the same office, making presidential elections the most democratic feature of the American political system.

When we think of democracy, we usually think of the ancient Greeks, but identifying the exact origins of political practices can be tricky. Many of the city-states of the ancient Near East, for example, had popular assemblies in which citizens passed laws and elected officials (see Jacob Klein, “The Birth of Kingship: From Democracy to Monarchy in Sumer”). But these states are seldom labeled democracies, and our own institutions do not trace directly back to theirs.

In looking for the origins of democracy, in fact, we will not find an unbroken tradition linking the democracies of the ancient world to those of the modern age. Democratic ideals and values disappeared from western Europe during the Middle Ages, and when they resurfaced in the 17th and 18th centuries, they were very different from their ancient predecessors. The roots of modern democracies lie in more recent times.

Nonetheless, the idea that the people should rule themselves is not new. The word “democracy,” meaning “power of the people,” is, of course, Greek in origin. Kingship disappeared from most of the Greek world during the so-called Dark Age (11th to 9th century B.C.E.). The city-states, or poleis, that began to emerge in the eighth century B.C.E. were not the possessions of individual rulers or even a limited number of families. These states were conceived as the common possession of their citizens and had strong egalitarian tendencies.

Just how democratic they were can be debated. The Greek city-states did not extend citizenship to all their inhabitants. Foreigners, women and slaves were excluded—a feature, however, that hardly distinguishes the ancient Greeks from other Western societies until modern times. Citizenship was limited to adult males—and not even to all of them, for full citizenship required ownership of land.

But land ownership was not restricted to an elite few, and what made many ancient Greek city-states democratic was their large number of small farmers: These farmers had a voice, however limited, in the affairs of government. 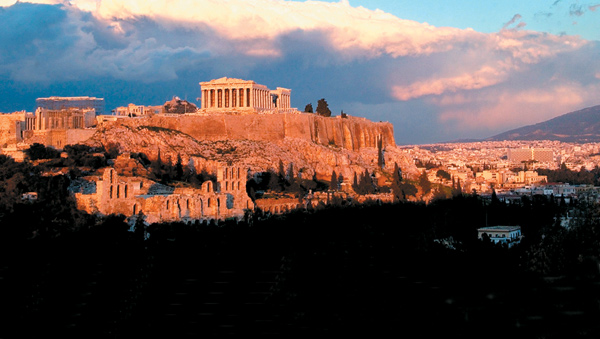 The numbers and influence of these middling landowners is evident in Greek warfare. By the seventh century B.C.E., Greek armies relied on heavily armed infantrymen called hoplites. Only citizens fought as hoplites, and each hoplite provided his own spear, shield, helmet and breastplate. The widespread use of hoplite warfare implies the existence of a substantial farming class that could supply its own armor in the early Greek poleis.

Ironically, ancient Sparta—notorious for its militant authoritarianism—offers some of the earliest evidence for hoplites and their acquisition of democratic rights. Spartan citizens called themselves homoioi or “equals,” a name deriving from either the identical training all Spartans underwent or the equal plots of land they received (the sources are unclear). Early on these “equals” also enjoyed some power in government. The Greek biographer Plutarch (c. 46–120 C.E.) preserves a document called the Great Rhetra, supposedly from the seventh century B.C.E., which outlines the branches of Spartan government. It mentions two kings, a council of 30 elders and a citizen assembly with final say in all decisions. The Spartan people were their own masters.

In ancient Athens, however, democracy advanced further. The Athenians extended the rights of citizenship to a far greater portion of their male inhabitants, including the poor and landless. How and why this development occurred at Athens are questions still hotly debated among historians,1 but the general outline is clear. At the start of the sixth century B.C.E. the reformer Solon sought to limit aristocratic oppression of the poorest Athenians by abolishing debts and debt slavery; he also ended the aristocracy’s monopoly on public office and gave all citizens the right to appeal the decisions of judicial officials. In 508–507 B.C.E. Cleisthenes implemented further reforms that made Athenian government more representative. He reorganized the citizen body into ten tribes, each drawing citizens from different parts of Attica (the area of Greece that includes Athens), and created a new Council of 500, which consisted of 50 members from each tribe. These reforms helped guarantee that the political process represented all Athenians.

Democracy, however, achieved its most developed state around the middle of the fifth century B.C.E. This final step is generally associated with a man named Ephialtes. All we know of him is that in 462–461 B.C.E., he sponsored reforms that deprived the Areopagus, Athens’s ancient aristocratic council, of its “extra” powers and transferred them to the law courts, the Council of 500 and the assembly of adult male citizens. We do not know what powers the Areopagus had exercised previously, so we cannot say precisely what powers Ephialtes gave to the people. But from this time the popular organs of Athenian government—the Council of 500, the law courts and especially the assembly—exercised sovereign power. Subsequent years brought further advances. Eligibility for the archonship (the archon was Athens’s highest public office; nine archons were appointed every year) was extended to more citizens, and public officials began to be paid for their service—which meant that more citizens could afford to participate in official political affairs.

Athenian democracy differed in many ways from our own, and we should not idealize it. The Athenians chose most of their state officials by lot (leaving the decision to chance), and most offices had a one-year term limit. These practices were designed to prevent corruption and ensured greater participation in government, but they could not have made government very efficient. The Athenians were also reluctant to extend democratic privileges to others: aliens residing in Athens had little hope of ever becoming naturalized Athenian citizens. During much of the fifth century B.C.E. the Athenians ruled over many other Greek city-states, including former allies; the tribute exacted from these cities helped to pay public officials in democratic Athens. It is no exaggeration to suggest (as many historians have before) that democracy and imperialism were quite closely connected.

Still, one Athenian practice may have contemporary relevance. At the end of the fifth century B.C.E., the Athenians began to pay citizens to attend meetings of the assembly. Originally the first 6,000 to show up for a meeting received the small amount of one obol (not even half a day’s wage), but by the middle of the fourth century B.C.E. that payment had grown six fold. Were the Athenians on to something? When voter turnout in American presidential elections hovers near 50 percent, this may be one lesson we wish to take from our Athenian ancestors.

——————
“Origins: …And by the People” by James Sickinger was originally published in the January/February 2001 of Archaeology Odyssey. It was first republished in Bible History Daily on November 6, 2018.

James Sickinger is an Associate Professor of Classics at Florida State University.

The Archaeology of Atheism in Ancient Athens