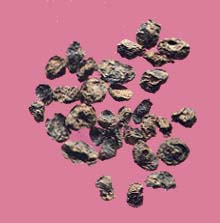 Carbonized raisins from Iron Age I (12th to 11th centuries B.C.) Shiloh were published by Israel Finkelstein in BAR in 1986.

Seeds and fruit remains are exciting discoveries for archaeologists. Not only do they provide clues about ancient agriculture and diets, they can also provide radiocarbon data to help date buried strata.

Fruit also plays an important role in the Biblical narrative. If Eve had not eaten the fruit in Genesis 3, the story of Eden would have looked drastically different. What do we know about the creative ways the Israelites used fruit in their writings and everyday culture?

The Hebrew Bible mentions six types of tree fruit, many of which appear dozens of times:

In my view, these six fruits are used in eight different ways in the Bible. First, many people are named after fruit, e.g., Tamar in Genesis 38:6, which means “date,” Tappuah in 1 Chronicles 2:43, which means “apple,” and Rimmon in 2 Samuel 4:2, which means “pomegranate.” 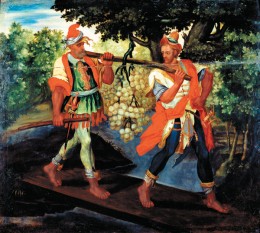 In this this anonymous 18th-century icon from the National Art Museum in Kiev, Ukraine, Joshua and Caleb carry grapes back from the Promised Land.

Third, images of fruit are used as decorations, e.g., the blue, purple, and crimson pomegranates on Aaron’s priestly garments (Exodus 28:33-34) and the engraved date palm trees in Solomon’s Temple (1 Kings 6:29).

Fourth, fruits are the subjects of laws, e.g., the law in Numbers 6:3 that a Nazirite may not eat or drink grape products or the law in Deuteronomy 24:20 that one may only beat an olive tree once (the remaining olives are for the poor).

Fifth, fruits are used in a number of metaphors and similes such as, “Your breath is like the fragrance of apples” in Song of Songs 7:9 and “I found Israel [as pleasing] as grapes in the wilderness” in Hosea 9:10.

Sixth, fruits appear in curses and blessings such as “Your olives shall drop off [the tree]” in Deuteronomy 28:40 and “[Israel is a blessed] land of wheat and barley, of vines, figs and pomegranates, a land of olive trees and honey” in Deuteronomy 8:8.

A team from the Tell Halif archaeological excavation made their own tannur, a traditional oven referenced in the Hebrew Bible, and baked bread in it. Read all about the experiment in “Biblical Bread: Baking Like the Ancient Israelites.”

Seventh, fruits are used pedagogically in proverbs such as “He who tends to a fig tree will enjoy its fruit” in Proverbs 27:18 and “Parents eat sour grapes and their children’s teeth are blunted” in Ezekiel 18:2.

Eighth, and perhaps most obvious, fruits appear as objects in narratives, such as in Numbers 13:23, where the spies of Moses examine the grapes, pomegranates and figs of the land, and in Genesis 3, where Eve eats the forbidden fruit and is cast from Eden.

While these eight categories are neither rigid nor mutually exclusive, they illustrate the diverse treatment of fruit in the Hebrew Bible. Fruit was much more than a food for the ancient Israelites. It was a symbol that appeared prominently in the culture’s names, laws, proverbs and traditions.

When archaeologists uncover seeds, they find much more than radiocarbon data. The Biblical narrative provides a social and symbolic significance for these important foodstuffs, reminding archaeologists that there is much more to these seeds than meets the eye.

Fruit-producing gardens were some of the most luxurious parts of ancient palaces, yet there is no archaeological evidence of the most famous example–the Hanging Gardens–at Babylon. Discover why archaeologists believe this World Wonder was actually located at Assyrian Nineveh.

David Z. Moster, PhD, is a Research Fellow in Hebrew Bible at Brooklyn College and a Lecturer in Rabbinics at Nyack College. He is the author of the upcoming book Etrog: How a Chinese Fruit Became a Jewish Symbol (Palgrave Macmillan, 2018). His websites are www.929chapters.com and brooklyn-cuny.academia.edu/DavidMoster.

More on food and dining in the Biblical world in Bible History Daily:

Olives for Ancient Eating: The earliest signs that olives were produced to be eaten, from 6,600 years ago, have been found off Haifa’s coast.

This Bible History Daily article was originally published on January 27, 2014.