In the July/August/September/October 2019 issue of BAR, Dr. Cynthia Shafer-Elliott writes about Tell Halifa and its focus on the study of the daily lives of the ancient Israelites.  According to Dr. Shafer-Elliott, the unearthing of a grinding installation suggests that the primary purpose of the living space at one of the eighth-century four-room houses excavated– A8 House– was food production: grinding grain into flour.

Not a subscriber yet? Join now.

In his book Cooked: A Natural History of Transformation, well-known food author Michael Pollan observes a curious paradox regarding cooking within American culture: “The less cooking we were doing in our own lives, it seemed, the more that food and its vicarious preparation transfixed us.”1 In other words, the further away we get from our food—both in growing it and cooking it—the more of a central role it plays in our society. Pollan points to the massive popularity of TV shows devoted to food and celebrity chefs as proof of our fascination with food. In the summer of 2015, a team from the Tell Halif archaeological excavation decided to make their own tannur (oven) and bake bread in it. Here, William Jessup University students Rose Kania and Jessica Rentz and Tell Halif supervisor Tim Frank make the clay mixture out of which the tannur will be made. Photo: Courtesy of Cynthia Shafer-Elliott.

This is an interesting observation that forces me to ponder my own fascination with food, which goes beyond watching the food network, surfing Pinterest for new recipes, or serving a meal to my family or guests. Food as a subject boiled-over (pun intended) into my academic research interests, too. I study what the ancient Israelites ate and how they prepared it; but, like Pollan suggests, I am disconnected not only from the food that I eat, but also the food that I study. One possible remedy for this disconnection to ancient food is to conduct an archaeological experiment. In the summer of 2015, student volunteers on the Tell Halif archaeological excavation in Israel suggested that we try to make our own tannur (i.e., oven) and bake bread in it. My colleague and fellow Tell Halif supervisor Tim Frank has made a tannur before, so under his guidance, we built one behind the Halif archaeological lab at Kibbutz Lahav.2

First, a brief description of what we were trying to build. There are a few different types of traditional ovens that are still used today in the Middle East. One of the most common oven types is the tannur. A modern tannur is a beehive-shaped clay oven, usually close to one meter high, and will typically have two openings: one at the bottom and one at the top.

Ethnoarchaeological studies show that after a fire fueled by kindling and animal dung is built on the floor of the tannur, the ashes are raked out of the bottom opening, before using the top opening to slap the dough onto the interior walls or even the floor to bake. Platters and cooking pots could also be placed on top of the upper opening and used for baking or cooking, respectively. Although most archaeological reports refer to ovens as a tabun, they are more like the tannur type of oven. The term tannur is found in the Hebrew Bible fifteen times, seven of which refer to an oven used to bake bread (Exodus 8:3; Leviticus 2:4, 7:9; 11:35; 26:26; Hosea 7:4, 6–7). Our experiment began one morning as we excavated by collecting five buckets of sifted dirt (though only half of the last one was used). It is important that the soil contains clay, and the soil at Tell Halif was perfectly acceptable for this experiment. The next day, Tim went down to the kibbutz stables and collected one bucket of straw. We gathered the next afternoon behind the excavation lab and cleared a place to begin our construction of a tannur. The ground where the oven was placed was moistened before one bucket of dirt was emptied onto it and the straw mixed in. Water was emptied into the middle of the dirt and straw and was used to knead the mixture together. More water and dirt was added and kneaded until the clay mixture had a medium-stiff consistency. Portions of the clay mixture were laid out in a circle and shaped in such a way as to attach it to the ground. The lower rung was extended to a height of approximately 4 inches, slightly inclining inward, and was then smoothed over. Once the bottom rung was complete, the process was repeated over the following days as the oven slowly dried. Each successive layer, slightly inclining, was added, until the tannur was approximately 12.5–13 inches high with a 19.5 inch-wide mouth. Some of the Tell Halif excavation team on baking night. Photo: Courtesy of Seung Ho Bang.

To complete the hardening process, a fire was lit using straw and pine cones inside and immediately surrounding the tannur’s walls on the outside. A few days later, dough was made using flour, water, yeast and a tiny bit of sugar (honey would have been more authentic, but none could be found. Salt could not be found, as well). After the dough had risen and was kneaded, it was divided into small balls and left to rise further. A fire was lit inside the tannur using straw and pine cones. Once the tannur was hot enough, the balls of dough were flattened into small loaves and were slapped onto the inside walls. The loaves only needed a few minutes to bake, after which the bread was removed carefully and consumed by the group. About the experiment, Rose, a student from William Jessup University, commented, “I couldn’t help but become more familiar with the [ancient] bread-baking process. Firsthand experience with the mud, bread and fire is far more didactic than any textbook, slideshow or lecture. Being part of this experiment was fascinating and eye-opening!” We were all pleasantly surprised at how well the tannur worked and how tasty the bread turned out. 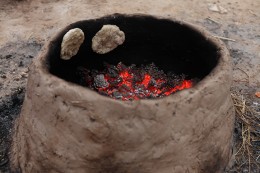 Small loaves of pita bread baking on the inside of the tannur. Photo: Courtesy of Seung Ho Bang. Small loaves of bread that were baked on the inside walls of the tannur. Photo: Courtesy of Seung Ho Bang.

Like many ancient societies, the Israelites were dependent upon cereals; so much so that the word for bread, “lechem,” is synonymous with food. The process of turning grain into flour, then into dough, and finally into bread, would have been time-consuming—not to mention the construction and maintenance of the tannur itself. Today, the immediate demand for food can be easily obtained; but, as a consequence, the connection to the food that we eat has weakened—and, to some extent, the connection to our own histories has weakened as well. Archaeology helps us physically connect to the past, and, in this instance, in some small way, it helped connect us to the food of the ancient Israelites.

Cynthia Shafer-Elliott, Ph.D., is Associate Professor of Hebrew Bible at William Jessup University in Rocklin, California. Dr. Shafer-Elliott has been part of several archaeological excavations in Israel and is currently serving on the staff of the Tell Halif excavations. She is interested in the daily lives of the average Israelite and Judahite household, including economics, food preparation and consumption, religion and the roles and relationships of the family. Her book Food in Ancient Judah: Domestic Cooking in the Time of the Hebrew Bible is published through Routledge, and she is currently editing a volume entitled The Five-Minute Archaeologist for Equinox.

2. A special thanks to Tim Frank for guiding us through this project. For more information on experimental archaeology and baking, please see University of Evansville Associate Professor of Archaeology Jennie Ebeling’s work.

This Bible History Daily feature was originally published on July 29, 2015.