One of my favorite ways to familiarize myself with a foreign culture is to sample its cuisine. Not only do you learn what ingredients and cooking methods are favored, but also the setting in which meals are typically shared and with whom.

This new BAR feature hopes to introduce you to a new—yet old—kind of cooking. If you have ever wanted to eat like an ancient Babylonian, Roman, etc., now you can. We’ve tracked down ancient recipes and tried to recreate them using modern ingredients, so that you, too, can enjoy these dishes. Join us on a gastronomical adventure! First on the menu is an ancient Babylonian stew. We selected a recipe that is named after its primary vegetable ingredient: tuh’u. Unfortunately, we are not able to identify tuh’u and a few other ingredients in the recipe. The late Assyriologist Jean Bottéro—formerly of L’École Pratique des Hautes Études (EPHE) in Paris—translated numerous Babylonian recipes, a task for which he was uniquely qualified as both a scholar of ancient Mesopotamia and an accomplished cook, and we have used his translation as the basis for our work:

“There must (also) be the flesh from a leg of lamb. Prepare the water. Add fat, [ … ], salt, beer, onions, (an herb called) spiney, coriander, samīdu, cumin, and beetroot to throw into the pot. Then, crush garlic and leeks, and add them. Let the whole cook into a stew, onto which you sprinkle coriander and šuḫtinnū.”1

This recipe is sparse and does not list exact measurements. It was discovered on Yale Babylonian Collection Tablet number 4644, which includes 24 other recipes. Written in Akkadian, the tablet dates to c. 1750 B.C.E. We have attempted to replicate Tah’u Stew, and the ingredients and measurements we used are printed here. All of the unidentifiable ingredients have been omitted.2

Bottéro claimed that he would never attempt to make ancient Mesopotamian recipes because there are too many unknown variables to ever be able to replicate them accurately.3 Although his assessment is certainly correct, we still thought this would be a worthwhile experiment. Perhaps our take is completely unrecognizable from the original; this is probably the case. Yet still, we thought it would be worth the try. It is our hope that in the process of studying ancient cuisines, we gain a deeper understanding of ancient cultures—adding new details to a complex, beautiful picture.

Every people in every place from every time eats—or has eaten—food. Perhaps you may better appreciate ancient Mesopotamian culture over a bowl of Tah’u Stew.

1) Wash and prepare all of the vegetables for the stew. Chop the onion and beets. 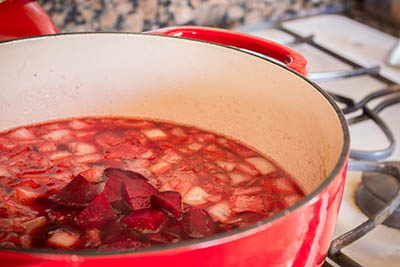 3) Chop the garlic and leeks. 4) Add the garlic and leeks to the stew and bring to a boil. Reduce heat to low and let the stew simmer for an hour, stirring occasionally. 5) Take lamb out of the pot and pull or cut the meat off the bone; then return the meat to the pot. (The photo below shows a lamb chop; for a meatier stew, use a lamb shank, per the recipe here, or another cut of lamb.) 6) Sprinkle with coriander and enjoy a bowl of Tah’u Stew! We thought it paired well with crusty bread. Based on Strata: “BAR Test Kitchen” from the May/June 2017 issue of Biblical Archaeology Review.

2. Jean Bottéro believes that samīdu and šuḫutinnū—two of the ingredients we omitted—were “probably in the onion family.” See Bottéro, “The Cuisine,” p. 42.