Ancient music and the biblical psalms 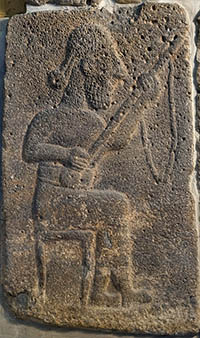 We can learn from Assyrian depictions of ancient musicians a good deal about how Biblical psalms might have been performed. The meditative, introverted lute player on this eighth-century B.C.E. relief from Samal in modern Turkey, for instance, can give us an idea of what the performer of a wisdom psalm may have looked like. Photo: Vorderasiatisches Museum Berlin/Photo Thomas Staubli.

Biblical psalms have throughout millennia been an important part of traditional Jewish and Christian worship. In synagogues and churches around the globe, psalms are sung today as they were two or three thousand years ago. Or are they? How much do we really know about how biblical psalms were originally performed? What might a psalm performance have looked like in the First Temple period, around 900 B.C.E.?

By examining available evidence, Thomas Staubli of the University of Freiburg, Switzerland, ventures to answer these intriguing questions in his Archaeological Views column “Performing Psalms in Biblical Times,” published in the January/February 2018 issue of Biblical Archaeology Review.

To be sure, there are no ancient music notations to inform us on the music arrangements of psalms in Iron Age Israel. What’s more, even though the collection of biblical psalms as we know it from the Hebrew Bible was established quite late, the oldest psalms were likely composed already in the 14th century B.C.E., from which we have no adequate documentation from Israelites themselves. Finally, given the biblical prohibition against graven images (Exodus 20:4), we do not possess depictions of people performing psalms. Because of this absence of direct evidence, Staubli focuses on comparative material, suggesting that we can learn much by simply taking a look at the Levantine neighbors of the early Israelites.

“The Bible does not tell us much about how psalms were originally performed. Archaeology and extra-biblical texts, however, can shed some light on the music and dance that accompanied psalms in biblical times,” summarizes Staubli his approach to the puzzle.

“Among the Levantine parallels to the biblical psalms is the famous text corpus from Ugarit on the northern coast of modern Syria,” explains Staubli, referencing the so-called shuilla or the Akkadian “lifted-hand” petition prayers to different deities. Like many of biblical psalms, these ritual prayers contain in their rubrics designations of the genre, the function of the prayer, or descriptions of ritual enactments. Two examples read as follows:

It is the wording of a lifted-hand to the god Enlil-banda. You do the ritual with either a ritual arrangement or an incense burner.

It is the wording of the lifted-hand prayer to the goddess Ishtar. Its ritual: In an inaccessible place (lit., where the foot is kept away) you sweep the roof, you sprinkle pure water, and you lay four bricks at right angles to one another. You heap twigs of the Euphrates poplar (on the brazier), and you kindle the fire. Aromatic plants, scented flour, and juniper wood you strew. You pour out beer. You do not prostrate yourself. This recitation before Ishtar you recite three times. You prostrate yourself, and you do not look behind you.1

There can further be no doubt that psalm singers were accompanied by players on musical instruments, which we can find depicted on numerous stone reliefs around the Levant (see image above).

Discovered on Elephantine, an island at the very southern border of ancient Egypt, the following fourth-century B.C.E. papyrus manuscript (P.Amherst 63) reveals that Yahweh was indeed seen as a music lover. Composed within the local Jewish community in Aramaic language but recorded in an Egyptian cursive script, it translates as follows: “Drink, Lord (YHWH), from the bounty of a thousand basins; be inebriated, Adonai, from the bounty of men. Musicians stand in attendance upon Lord (Mar): a player of the bass lyre (nevel), a player of the lyre (kinnor).”2

To learn more about ancient music and enactments of Biblical psalms, read the full Archaeological Views column “Performing Psalms in Biblical Times” by Thomas Staubli in the January/February 2018 issue of Biblical Archaeology Review. Examining both pictorial and written sources, Staubli reveals how psalms were likely performed in times of King David, who is credited with composing many of the biblical psalms.

This post originally appeared in Bible History Daily in February, 2018

1. Adapted from Alan Lenzi (ed.), Reading Akkadian Prayers and Hymns: An Introduction, Atlanta: Society of Biblical Literature, 2011, pp. 241 & 284. From ancient times, lifted hands are an expression of prayer (or greeting).