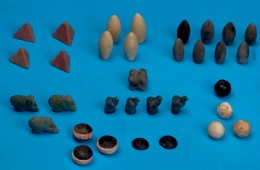 These tokens, which appear in sets of four, are the oldest gaming pieces in the world, according to an article in Discovery News. Photo: HALUK SAĞLAMTIMUR

Graves provide insights into a culture’s understanding of the afterlife, and burials can include uniquely personal archaeological data. Turkish archaeologists working on a 5,000-year-old burial uncovered early evidence of an unexpected type of tradition: games.

The earliest dice known date to the second half of the third millennium B.C.E.; they come from the Indus Valley culture, in present-day Pakistan, and from Mesopotamia in the Early Dynastic III period (c. 2500–2300 B.C.E.). These ancient specimens look very much like modern dice, and some of them have dots arranged in the modern way (with dots on opposite sides adding up to seven). The Mesopotamians continued to play with dice in the second and first millennia B.C.E.; a late example from Babylon is even made of glass. Further west, in Palestine and Egypt, various shapes were experimented with, but the “modern” cubical shape and dot arrangement is also attested, for example in dice recovered in excavations at Ashkelon. The rules for playing this third-millennium B.C.E. game, found in the Royal Cemetery at Ur and now housed in the British Museum, are unknown. The board consists of 20 squares inlaid with shell, lapis lazuli, red paste and red limestone. Two sets of seven counters and three four-sided dice were found with the board. Similar game boards are known from the eastern Mediterranean to India. Photo: British Museum.

In addition to dice games, board games were popular across the ancient Near East and the Indus Valley. William W. Hallo continues:

The simplest is a board with 58 holes arranged in four lines, with the two outside lines having 19 holes each and the two inside lines having 10 holes each. This game required counters to be moved from hole to hole according to certain rules. The counters, and the dice associated with the game, would have been pebbles or the knucklebones of sheep or other small animals (sometimes called astragali, from the Greek word astragaloi). The game board itself, though sometimes made of wood, ivory or even stone, was typically made of clay. This game has been played all over the Near East, from ancient times down to the present day.

A more sophisticated game board was found in the excavations of the Royal Graves at Ur, dating to the middle of the third millennium B.C.E. Elaborately carved and inlaid with shell and lapis lazuli (see photo, above), the board has 20 squares in seven different patterns. Variations on these 20-square game boards have been found at ancient Assyrian sites, in modern Lebanon (Kumidi), in the Indus Valley and at Shahr-I-Sokhta in northeastern Iran, the last in the form of a snake. This snake-shaped board from Iran suggests a connection with the senet game of Egypt, which has 20 to 30 squares typically arranged in the shape of a snake.

The most complicated ancient game board is represented by only two Mesopotamian examples. This board is divided into 84 fields by horizontal, vertical and diagonal lines. The inscription on one of the boards is probably the name of the game:illat kalbeµ, meaning “pack of dogs.” The other board is inscribed more elaborately, not only with its date (177/6 B.C.E.) but also with its rules! According to Irving Finkel, who organized a colloquium on ancient board games for the British Museum, the rules call for two players to use five pieces named after birds (including a raven, a rooster, a swallow and an eagle) and a die made from knucklebone. Finkel also discovered a survival of this game among the Jews of Cochin in southern India, where the game is played only by women and only on the Ninth of Ab—which is the Jewish fast day commemorating the destruction of the Temple.