Investigating the Queen of Sheba and her kingdom 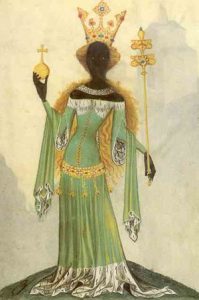 Who is the Queen of Sheba? In the Bible we are introduced to an unnamed queen from the land of Sheba who travels to Jerusalem to meet King Solomon (see 1 Kings 10; 2 Chronicles 9). Accompanied by many attendants and camels, the Queen of Sheba brings a large quantity of spices, gold and precious stones with her. She is drawn to Jerusalem because of Solomon’s fame, and she tests the king with hard questions. Solomon is able to answer them all.

Impressed by Solomon’s wisdom—and by the riches of his kingdom—she proclaims, “Your wisdom and prosperity far surpass the report that I had heard” (1 Kings 10:7). The Queen of Sheba gives King Solomon 120 talents of gold, precious stones and the largest quantity of spices ever brought to Jerusalem (1 Kings 10:10). In return King Solomon gives the Queen of Sheba gifts and “every desire that she expressed” (1 Kings 10:13). After receiving these gifts, the queen returns to the land of Sheba with her retinue.

The Biblical account of the Queen of Sheba and King Solomon ends there, but later Jewish, Christian and Islamic sources have elaborated the story—adding details to the famous queen’s visit. In his article “Where Is the Land of Sheba—Arabia or Africa?” published in the September/October 2016 issue of Biblical Archaeology Review, Bar Kribus investigates the location of the land of Sheba and looks at the figure of the Queen of Sheba—both in the Bible and in a text called the Kebra Nagast.

Dated between the 6th–14th centuries C.E., the Kebra Nagast (The Glory of Kings) is an important text to the Ethiopian Orthodox Church. It names the Queen of Sheba as the beautiful queen Makeda and identifies the land of Sheba as ancient Ethiopia. Kribus thoroughly examines the latter claim in his article “Where Is the Land of Sheba—Arabia or Africa?”

According to the Kebra Nagast, Queen Makeda travels to Jerusalem and has a love affair with King Solomon. Makeda then returns to the land of Sheba—giving birth to a son, Menelik, along the way. Menelik is raised in Ethiopia, but when he turns 22, he travels to Jerusalem to meet his father. King Solomon is delighted with his firstborn son and tries in vain to convince Menelik to remain in Israel and succeed him as king. However, Menelik chooses to return to the land of Sheba. Solomon sends the firstborn sons of Israel’s elders with his son from Israel to Ethiopia, and the Ark of the Covenant travels with them. To this day, many Ethiopians believe that the Ark of the Covenant resides within the Chapel of the Tablet next to the Church of Maryam Tsion in Aksum, Ethiopia. 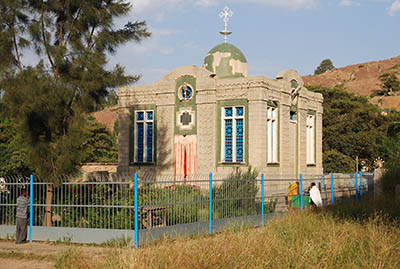 Is this the final resting place of the Ark of the Covenant? Many Ethiopians believe that the Ark of the Covenant resides within the Chapel of the Tablet next to the Church of Maryam Tsion in Aksum, Ethiopia. They believe that the Ark traveled with Solomon’s firstborn son, Menelik, from Jerusalem to the land of Sheba. Where is the land of Sheba? According to the Kebra Nagast, it is ancient Ethiopia. Photo: “Maryam Sion in Axum Nebenbau Mit Der Bundeslade 2010” by Jensis65 is licensed under CC-by-SA-3.0

Ethiopians claim the Queen of Sheba as part of their heritage, and through her union with King Solomon, Ethiopians also claimed a connection between their kings and the Davidic monarchy of Israel. Bar Kribus explains: “Their [Ethiopian] kings were seen as direct descendants of the House of David, rulers by divine right.”

But is the land of Sheba truly ancient Ethiopia, as purported by the Kebra Nagast? Archaeological and historical sources document a Kingdom of Saba (Sheba) during Biblical times in modern-day Yemen. Those in ancient Ethiopia were fully aware of the Kingdom of Saba in southern Arabia—and sometimes even appropriated aspects of their culture. 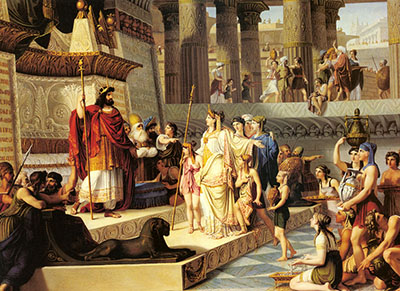 ——————
BAS Library Members: Read the full article “Where Is the Land of Sheba—Arabia or Africa?” by Bar Kribus in the September/October 2016 issue of Biblical Archaeology Review. Not a BAS Library or All-Access Member yet? Join today.

This Bible History Daily feature was originally published on August 31, 2016.