Who were the Nabataeans? Who were the Nabataeans? The Siq is a tortuous half-mile-long canyon that winds its way from the entrance of Petra to the large open plaza at the foot of the Khazneh. Formed through countless millennia of geological activity and water action, the canyon was used by the Nabataeans as a ceremonial route into their capital. The sides of the Siq were also outfitted with channels and pipes that carried fresh water into the city.

For every tourist who visits the ancient city of Petra in modern-day Jordan, there is one breathtaking moment that captures all of the grandeur and mystery of this city carved in stone. After passing the final bend of the tortuous narrow canyon that leads into the site (the Siq), one is confronted by the awe-inspiring spectacle of a towering rock-cut façade, its sun-struck sandstone gleaming through the darkness of the canyon.

The façade, popularly known as the Khazneh, or “Treasury,” appears first only as a faint vision, its architectural details and full dimensions crowded out by the darkened walls of the Siq. But as you leave the Siq and enter the large open courtyard that sits before the Khazneh, you begin to realize, with astonishment and wonder, the immensity of the monument that towers above you.

The Khazneh is both unexpectedly familiar, and at the same time, strangely exotic. Its ornamented face is adorned with the columns, capitals and pediments of classical Western architecture, yet it seems entirely out of place in the rugged desert landscape of southern Jordan, an area historically inhabited by flock-tending Bedouin and simple farmers. Perhaps it was this bewildering juxtaposition that made the Khazneh the ideal backdrop for the climactic scene of the 1989 film Indiana Jones and the Last Crusade. 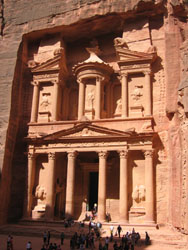 Al-Khazneh (“the Treasury”), likely a tomb or monument to King Aretas IV who ruled over the Nabataeans from 9 B.C. to 40 A.D.

In many ways, the Khazneh epitomizes the complex character and competing ambitions of the Nabataeans, the industrious Arab people who built the city of Petra and its towering rock-cut monuments (including the Khazneh) over 2,000 years ago. Almost everything about the Nabataeans—their history, their culture, their religion, their technologies and especially their architecture—reflects a society born out of two worlds: one authentically Arabian, and the other unquestionably Hellenized.

The Nabataeans arose from humble nomadic origins in the vast deserts of northern Arabia sometime during the Persian period (539-332 B.C.). By the late fourth century B.C., they had established themselves in the area around Petra (or Reqem, as it was known to them), but they still maintained a largely nomadic existence, moving seasonally across the desert with their tents and herds in search of water and fresh pasture.

But it was also about this time that the Nabataeans began to get involved in the lucrative trade in South Arabian frankincense and myrrh, the same business that had led the Queen of Sheba to visit the court of Solomon some five centuries earlier (1 Kings 10). At first, the Nabataeans were little more than middlemen in the trade, simply responsible for ferrying goods on camelback from Petra to the ports of Gaza and Alexandria on the Mediterranean coast. But as their economic and political fortunes improved in the ensuing centuries, the Nabataeans gained political control over all of the lands bordering the Arabian frontier, a vast territory stretching from Damascus in the north to Hegra in the south.

By the first century B.C., Petra had become a full-fledged capital city, its rulers raking in considerable profits from an international spice trade that now extended from India to Rome. With such wealth and position, the Nabataean kings had to present both themselves and their city as equal partners in the international community, which at the time meant adopting the styles, tastes and the mores of “western” Hellenistic civilization. Petra, much like Jerusalem under the Herodian dynasty, was to be built as a first-order Greco-Roman city ruled by western-looking kings. Like most cities of early Roman Palestine, Petra was equipped with a large theater complex that may have seated as many as 6,000. Petra’s theater, however, was carved almost entirely from the area’s natural bedrock.

Indeed, the distinctly Hellenized flavor of Petra is patently obvious to any visitor to the site, even beyond the ornate façade of the Khazneh. Just a half-mile beyond the Treasury, one finds the well-worn but still very impressive remains of a Greco-Roman style theater, its multi-tiered seating not built but rather carved directly from Petra’s rose-colored sandstone bedrock. From the theater’s seats, one can just catch a glimpse of the elaborate, Hellenistic rock-cut façades of the Royal Tombs, thought to be the final resting places of the Nabataean kings and queens. The first-century A.D. colonnaded street leading through the heart of the Nabataean city of Petra. In the distance is the imposing ruin of Qasr el-Bint, the city’s main temple.

After a short hike beyond the theater, one comes to the heart of ancient Petra: a wide, half-mile long, stone-paved thoroughfare flanked on all sides by the key institutions of the city’s Hellenistic life. On the left, one can spot the remnants of luxurious pools and gardens, as well as a bustling market and a grand temple reached by a monumental staircase; to the right, there is an elegant nymphaeum and an opulent shrine dedicated to al-Uzza, one of the chief goddesses of the Nabataeans.

Further down the avenue, beyond the remains of a towering triumphal gate, stands the imposing edifice of Petra’s main temple, known today as Qasr al-Bint. With its walls preserved to a height of over 75 feet, Qasr al-Bint was built in the guise of a traditional Roman temple, with a broad colonnaded porch leading to a smaller interior shrine, or Holy of Holies. It was likely built in honor of the chief Nabataean god Dushara. Some distance behind this temple, on a hill overlooking the city’s main street, archaeologists have uncovered Petra’s high-rent district (known today as Zantur), where wealthy citizens owned villas adorned with colorful Pompeian-style frescoes and supplied with the finest local and imported wares.

Beyond the city center, however, the Hellenistic flavor of Petra gives way to monuments and features that are directly born of the Nabataeans’ nomadic and Arabian origins. A rigorous climb up Jabal al-Madhbah behind the Roman theater, for example, brings you to an open-air sanctuary topped by towering obelisks that was set aside for religious sacrifices and rituals. A similar open-air sanctuary has been found atop neighboring Jebel al-Khubtha to the east. Both sites, in addition to providing stunning views over the heart of ancient Petra and its intricate honeycomb of rock-cut tombs, highlight the importance of traditional high-place sanctuaries within Nabataean society.

One also finds depictions of rectangular stone blocks, or betyls, carved in the stones and rock faces throughout Petra’s cavernous passageways. These typically unadorned blocks (though some have schematized facial features) are thought to be traditional representations of Nabataean deities. Simplicity and minimalism in building and decoration is characteristic of the Arabian aspects of Nabataean civilization. Even ad-Deir (“the Monastery”), Petra’s largest and most imposing rock rock-cut façade, located in the hills high above the city, shows an austere Arabian decorative scheme that belies its otherwise Hellenistic architectural style.

The Nabataeans also had to learn to harness the limited water resources of their desert capital. Throughout Petra, Nabataean engineers took advantage of every natural spring and every winter downpour to channel water where it was needed. They constructed aqueducts and piping systems that allowed water to flow across mountains, through gorges and into the temples, homes and gardens of Petra’s citizens. Walking through the Siq, one can easily spot the remains of channels that directed water to the city center, as well as durable retention dams that kept powerful flood waters at bay.

But the apogee of this prosperous desert capital that rivaled Herod’s Jerusalem was short lived. By 106 A.D., the kingdom of Nabataea had been swallowed by the Roman Empire. Although Petra continued to flourish for many years, its importance waned as the overland trade in South Arabian incense declined and the Roman imperial economy collapsed. The city, like much of southern Palestine, was then devastated by an earthquake in 363 A.D. Petra carried on and even saw the rise of a significant Christian community, but it never again attained its former glory.

Glenn J. Corbett is Editor-in-Chief of Biblical Archaeology Review Magazine. He was Associate Director of the American Center of Oriental Research (ACOR) in Amman, Jordan, Director of the Wadi Hafir Petroglyph Survey. He received his Ph.D. in Near Eastern archaeology from the University of Chicago, where his research focused on the epigraphic and archaeological remains of pre-Islamic Arabia.

This Bible History Daily article was originally published in August 2012.