Were the Judahites really weeping by the rivers of Babylon?

The Babylonian Exile that resulted from King Nebuchadnezzar’s sixth-century B.C.E. capture of Jerusalem has traditionally been portrayed with the Judahites lamenting their circumstances. But the textual remains left by the Babylonians and even some Judahites may reveal an entirely different story.

The Babylonian Exile began in 597 B.C.E. with the deportation of Judahite king Jehoiachin, his family, skilled craftsmen, warriors and 10,000 additional captives (2 Kings 24:12–16). Two more deportations took place: one in 586 B.C.E., when Jerusalem and the Temple were destroyed, and another in 582 B.C.E. Jeremiah 52:28–30 claims that a total of 4,600 Judahites were displaced in the Babylonian Exile. Psalm 137:1–2 poetically recounts the feelings of the deported Judahites: “By the rivers of Babylon, there we sat, sat and wept, as we thought of Zion. There on the poplars we hung up our lyres.” 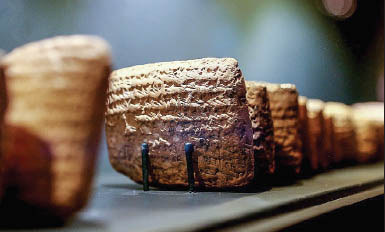 Cuneiform tablets from “Judahtown” (Babylonian āl-Yāḫūdu) offer insight into what life was like for ordinary Judahites during the Babylonian Exile. Photo: Avi Noam.

University of California, Berkeley, Lecturer in Akkadian Laurie E. Pearce explores the evidence in her article “How Bad Was the Babylonian Exile?” in the September/October 2016 issue of Biblical Archaeology Review. According to Pearce, despite the melancholic tone of Psalm 137, life in Babylon was actually pretty good for many of the Judahite deportees.

The lives of non-royal Judahites, too, are preserved in Babylonian records. Texts from Nippur contain the names of Judahites who served as witnesses in land contracts. The Judahite identity of the witnesses is revealed by their Yahwistic names—names formed from the Israelite divine name YHWH. The texts record the business activities of a family whose patriarch was an entrepreneur named Murašû. Since witnesses to contracts usually have the same social status as those engaged in the transaction, this would suggest, Laurie E. Pearce argues, that a number of Judahites were as successful as the Murašû family.

The ancient city of Nimrud on the northeast bank of the Tigris River served as the capital of the Neo-Assyrian Empire. Learn more about Nimrud in a BAS Library special collection of articles >>

Records from the city of Susa (Biblical Shushan, where the book of Esther is set) reference Judahites with Yahwistic names serving as royal courtiers, and in Sippar, a few Yahwistic names appear under the designation “royal merchant.” However, the majority of Pearce’s evidence that the Babylonian Exile wasn’t so bad is focused on cuneiform texts from in and around a settlement called Judahtown (Babylonian āl-Yāḫūdu).

“These texts, along with approximately 160 texts written in nearby towns,” Pearce writes, “provide balance to the known documentation, now attesting to the lives of the lowly as well as high-born Judean and other West Semitic exiles, in rural as well as the previously documented urban landscapes, from the start of the Judean Exile to the time of the rebuilding of the Temple and beyond.”

The evidence reveals a diversity of experiences for the Judahite exiles, and the picture of the Judahite experience in the Babylonian Exile that emerges is perhaps not as morose as previously believed.

To learn more about the Judahite experience during the Babylonian Exile as gleaned through the Biblical and archaeological evidence, including the texts from Judahtown, read the full article “How Bad Was the Babylonian Exile?” by Laurie E. Pearce in the September/October 2016 issue of Biblical Archaeology Review.

——————
BAS Library Members: Read the full article “How Bad Was the Babylonian Exile?” by Laurie E. Pearce in the September/October 2016 issue of Biblical Archaeology Review.

This Bible History Daily feature was originally published on September 22, 2016.

Laments at the Destroyed Temple