3,700 years ago, a temblor may have led an active palatial site at Tel Kabri to be abandoned 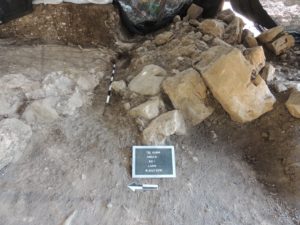 Tel Kabri, a 75-acre site in the western Galilee had been occupied by the Canaanites for centuries. Then, about 1900-1700 B.C.E.. the palace and the city were left deserted. In a study released on Plos One, researchers revealed their conclusion that an ancient Earthquake was most likely responsible.

The palace at Tel Kabri had been lavishly decorated in the Aegean-style. As Eric H. Cline and Assaf Yasur-Landau discussed in the article, Aegeans in Israel: Minoan Frescoes at Tel Kabri (Biblical Archaeology Review: July/August 2013), the inscribed tablets at Mari mention artists, physicians, and craftspeople traveling from city to city, going from king to king. Masons, sculptors, and other artisans from Minoan Crete–or inspired by their previous travels to work on the island’s palaces–brought the style to the frescoes and orthostat blocks that have been excavated in Tel Kabri’s ruins. In the University of Haifa press release, researcher Dr. Assaf Yasur-Landau explains, “A few seasons ago, we began to uncover a trench which runs through part of the palace, but initial indications suggested that it was modern, perhaps dug within the past few decades or a century or two at most. But then, in 2019, we opened up a new area and found that the trench continued for at least thirty meters, with an entire section of a wall that had fallen into it in antiquity, and with other walls and floors tipping into it on either side.” Lead author Dr. Michael Lazar explains that proving past earthquakes is normally difficult, but at Tel Kabri they found warped plaster floors, displaced walls, and mudbricks from walls and ceilings collapsed into rooms, burying jars. 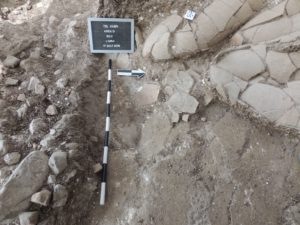 Ancient Jars fell in the trench. Photo: U. Haifa

If this theory is correct, it won’t be the only time Seismic events have impacted the course of ancient civilizations. The Alaskan volcano of Okmok disrupted weather 6,000 miles away, contributing to the end of the Roman republic. Hippos-Sussita was damaged by earthquake in 363 C.E., though it recovered until the catastrophic Earthquake of 749 destroyed it, along with most of Tiberias, Beit She’an Pella, and Gadara. The Egyptian Nile delta cities Heracleion and Canopus sank into the sea some 2,000 years ago, partially as a result of earthquakes. In Crete, The Minoan civilization itself is believed to have ended after being weakened by the tsunami caused by the eruption of the Santorini volcano in the 17th century B.C.E.

The Study, Earthquake damage as a catalyst to abandonment of a Middle Bronze Age settlement: Tel Kabri, Israel, authored by Michael Lazar, Eric H. Cline, Roey Nickelsberg, Ruth Shahack-Gross, and Assaf Yasur-Landau, appeared in Plos One on September 11, 2020. Their work was funded by the National Geographic Society and the Israel Science Foundation.

Imagining the Minoans by Barry Unsworth. Love Crete or not—and I have yet to meet anyone who has spent much time there and doesn’t—it is hard to think of anywhere else on earth where so many firsts and mosts are crammed into a space so small. At scarcely more than 3,000 square miles in area, it comes only fifth in order of size among the islands of the Mediterranean. But this patch of land, most of it rock, was home, something like 5,000 years ago, to the first society in Europe developed enough to be regarded as a distinctive civilization. We call the pre-Greek people who lived here Minoans, without knowing what they called themselves.

Did Theseus Slay the Minotaur?: How Myth and Archaeology Inform Each Other by Jeremy McInerney.In 1876, Heinrich Schliemann completed a season’s excavation at Mycenae, where his faith in Homer’s text was repaid with spectacular success. Having excavated one of the shafts in grave circle A, close by the Lion Gate, Schliemann had come down on a burial containing the remains of a man whose face in death had been covered by a gold plate, beaten out to form a crude portrait. According to a story widely told, Schliemann claimed that the features of the dead man’s face had remained visible for a split second before crumpling into dust. He cabled the king of Greece and announced that he had discovered the tomb of Agamemnon.

The Sea Peoples and Their Contributions to Civilization by Avner Raban and Robert R. Stieglitz. The Sea Peoples are unappreciated. This is in part because the most famous of them, the Philistines, received such bad press in the Bible. But the other Sea Peoples—among them the Shardana, Sikila, Lukka and the Danuna—have also been treated poorly, even by scholars, who often blame them for causing the widespread disorder and destruction that occurred throughout the eastern Mediterranean world at the end of the Late Bronze Age (about 1250–1200 B.C.E.)—for undermining the social, economic and military organization of Bronze Age civilization, and for bringing it to an end.