Standing more than 6.5 feet tall and dating to the Iron Age, this statue of an Ammonite king was uncovered in 2010 at Amman, Jordan. Photo: Joel S. Burnett 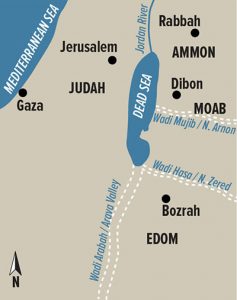 Who were the Ammonites, Moabites and Edomites in the Bible?

Who were the Ammonites? In the Bible, they are described as being descendants of Ben-ammi, who was the son of Lot (Abraham’s nephew) and Lot’s younger daughter (Genesis 19:38). The capital of the Iron Age kingdom of Ammon was Rabbah, which is located at modern-day Amman, Jordan. Burnett describes the boundaries of Ammon: “The Ammonite heartland comprised the north-central Transjordanian Plateau encircled by the upper Jabbok … within a 12.5-mile radius of its capital at the headwaters of the Jabbok.” The Ammonites’ primary deity was the god Milcom. Depictions of Milcom have been uncovered through archaeological excavations—as have representations of Ammonite kings, such as the monumental statue uncovered at Rabbah in 2010.

We learn about the Moabites in the Bible and in the famous Mesha Stele. Photo: “Stèle de Mésha” by Mbzt 2012 is licensed under CC-by-3.0

Who were the Moabites? In the Bible, the Moabites are said to have descended from Moab, the son of Lot and his oldest daughter (Genesis 19:37). The kingdom of Moab stretched “north and south of the Arnon River” with its capital at Dibon. The Moabites worshiped the god Chemosh, who may be depicted in the Balua‘ Stele (dated to the end of Late Bronze Age). The most famous Moabite king—from the archaeological record at least—is Mesha. The large inscription he left behind is the longest Moabite text. Dating to the ninth century B.C.E., the Mesha Stele describes how King Mesha rescued the Moabites from Israelite rule.

Who were the Edomites? In the Bible, the Edomites are the descendants of Esau, Jacob’s twin and Isaac’s oldest son (Genesis 36). The Edomites controlled an area east of the Arabah, from the Zered to the Gulf of Aqaba. Their capital was Bozrah, which sat in the northern part of their territory. Although no name of an Edomite deity is given in the Bible, archaeologists know from inscriptions that the Edomites’ principal deity was Qaus (or Qos). Several Edomite places of worship and cultic figurines have been uncovered. One of the most notable is the depiction of an Edomite goddess wearing a three-horned headdress from the site of Qitmit, Israel. Wearing a three-horned headdress, this Edomite goddess figurine was discovered at Horvat Qitmit. Photo: “Edomite Goddess, Qitmit” by Chamberi is licensed under CC-by-SA-3.0

The kingdoms of Ammon, Moab and Edom fought with the Israelites and the Judahites over territory. The Bible presents things from the Israelites’ and Judahites’ point of view, and archaeological discoveries help show us the other side. By looking at what these ancient peoples wrote and left behind, we are able to better understand their perspective. We now have a fuller picture of their kings, gods and daily life.

To learn more about the kingdoms of Ammon, Moab and Edom, read Joel S. Burnett’s comprehensive article “Ammon, Moab and Edom: Gods and Kingdoms East of the Jordan,” in the November/December 2016 issue of Biblical Archaeology Review.

——————
Subscribers: Read the full article “Ammon, Moab and Edom: Gods and Kingdoms East of the Jordan,” by Joel S. Burnett in the November/December 2016 issue of Biblical Archaeology Review.

Human Sacrifice to an Ammonite God?

This Bible History Daily feature was originally published on October 12, 2016.