Did the monotheism of Egyptian Pharaoh Akhenaten influence Moses? 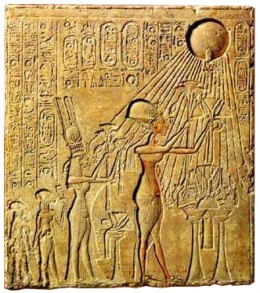 On this stela from El-Amarna, Egyptian King Akhenaten is seen with his wife Nefertiti and their daughters bearing offerings to the sun-disk Aten.

Defying centuries of traditional worship of the Egyptian pantheon, Egyptian Pharaoh Akhenaten decreed during his reign in the mid-14th century B.C.E. that his subjects were to worship only one god: the sun-disk Aten. Akhenaten is sometimes called the world’s first monotheist. Did his monotheism later influence Moses—and the birth of Israelite monotheism?

Egyptian King Akhenaten, meaning “Effective for Aten”—his name was originally Amenhotep IV, reigned from about 1352 to 1336 B.C.E. In the fifth year of his reign, he moved the royal residence from Thebes to a new site in Middle Egypt, Akhetaten (“the horizon of Aten,” present-day Tell el-Amarna), and there ordered lavish temples to be built for Aten. Akhenaten claimed to be the only one who had access to Aten, thus making an interceding priesthood unnecessary.

In the BAR article “The Monotheism of the Heretic Pharaoh,” Donald B. Redford, who excavated Akhenaten’s earliest temple at Karnak (in modern Thebes), describes how Akhenaten instituted worship of Aten:

The cult of the Sun-Disk emerged from an iconoclastic “war” between the “Good God” (Akhenaten), and all the rest of the gods. The outcome of this “war” was the exaltation of the former and the annihilation of the latter. Akhenaten taxed and gradually closed the temples of the other gods; the images of their erstwhile occupants were occasionally destroyed. Cult, ritual and mythology were anathematized, literature edited to remove unwanted allusions. Names were changed to eliminate hateful divine elements; and cities where the old gods had been worshipped, were abandoned by court and government.

Akhenaten destroyed much, he created little. No mythology was devised for his new god. No symbolism was permitted in art or the cult, and the cult itself was reduced to the one simple act of offering upon the altar. Syncretism was no longer possible: Akhenaten’s god does not accept and absorb—he excludes and annihilates.

Did Egyptian Pharaoh Akhenaten’s adamant worship of one deity influence the Biblical Moses, leader of the Israelite Exodus? Was Akhenaten’s monotheism the progenitor of Israelite monotheism? According to BAR author Brian Fagan, we are talking about two different kinds of monothesisms:

“Israelite monotheism developed through centuries of discussion, declarations of faith and interactions with other societies and other beliefs,” Fagan writes. “In contrast, Akhenaten’s monotheism developed very largely at the behest of a single, absolute monarch presiding over an isolated land, where the pharaoh’s word was divine and secular law. It was an experiment that withered on the vine.”

The Biblical Archaeology Society publication Aspects of Monotheism: How God Is One, edited by Hershel Shanks and Jack Meinhardt, presents an exciting, provocative and readily understandable discussion of the origins and evolution of monotheism within Judaism and Christianity. The book is free for BAS Library members.

When Tutankhaten—the second son of Akhenaten; we know him as the famous King Tut—ascended to the throne, he, working with his advisers, restored worship of the traditional Egyptian pantheon and its chief god, Amun. Tutankhaten also changed his name to Tutankhamun, meaning “the living image of Amun.”

To learn more about the monotheism of Egyptian King Akhenaten, read the full article “Did Akhenaten’s Monotheism Influence Moses?” by Brian Fagan in the July/August 2015 issue of Biblical Archaeology Review.

This Bible History Daily feature was originally published on June 8, 2015.