When did the laws of the Torah become the norm? Where can we situate the origins of Judaism? If we were able to travel back in time, would we find ancient Israelites and Judeans following the laws of the Torah during the First Temple period? Almost certainly not, claims Yonatan Adler in his recent scholarly book and a popular article that was just published in the Winter 2022 issue of Biblical Archaeology Review. So, what about during the Babylonian Exile (sixth century BCE), which is when many biblical scholars date the completion of the Torah? In his article “The Genesis of Judaism,” Adler asserts that even at this later date, most ordinary Judeans were not yet following the laws of the Torah. What does this mean for the origins of Judaism?

The Genesis of Judaism

For millennia, Jewish identity has been closely associated with observance of the laws of the Torah. The biblical books of Deuteronomy and Leviticus give numerous prohibitions and commandments that regulate different aspects of Jewish life—from prayers and religious rituals to agriculture to dietary prescriptions and ritual bathing. It stands to reason that the moment when people in ancient Judea recognized these laws as authoritative would mark the origins of Judaism.

As Adler discusses, however, even the Bible itself presents a somewhat different picture:

Ancient Israelite society is never portrayed as keeping the laws of the Torah. The Israelites during the time of the First Temple are never said to refrain from eating pork or shrimp, from doing this or that on the Sabbath, or from wearing mixtures of linen and wool. … Nor is anybody ever said to wear fringes on their clothing, to don tefillin on their arm and head, or to have an inscribed mezuzah on the doorposts of their homes. Whatever it is that the biblical Israelites are doing, they do not seem to be practicing Judaism!

So, when can we date the actual origins of Judaism? Or, as Yonatan Adler puts it: “When did ancient Judeans, as a society, first begin to observe the laws of the Torah in their daily lives?” To answer this question, Adler looks at the archaeological evidence for widespread observance of the laws of the Torah. He suggests that our inquiry begin in the first century CE, where we have plenty of evidence. He then goes backward in time, until he reaches a point when we can no longer see material traces of typical Jewish religious and ritual practices. 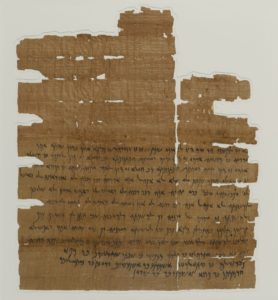 The Judean community on Elephantine, in southern Egypt, produced a wealth of documents in Aramaic, including this adoption contract from October 22, 416 BCE. They provide clues also about observance (or not observance) of the laws of the Torah. Photo courtesy of Brooklyn Museum, Bequest of Theodora Wilbour, from the collection of her father, Charles Edwin Wilbour.

In particular, Adler traces archaeological imprints of the biblical laws addressing dietary prohibitions, ritual purity, graven images, tefillin and mezuzot, and Sabbath observance. In every instance, the trail of archaeological evidence ends in the mid-second century BCE—moving the origins of Judaism several centuries later than even the most critical scholars previously thought.

Surprisingly, textual sources from Babylon and Egypt, including this letter from the island of Elephantine, reveal that fifth-century BCE Judeans did not celebrate Passover at a set date, were not aware of a seven-day week or the Sabbath prohibitions, and that they sometimes prayed to deities other than Yahweh.

Widespread observance of the ritual purity laws, as attested through ritual baths (later known as mikva’ot) and the use chalk vessels, is strong in the first century BCE but gradually disappears as we look further back in time past the late second century BCE.

When it comes to the biblical command against graven images (Deuteronomy 5:8), we can see that during the Persian period even the high priests were issuing coins with depictions of human and animal figures. The pictured silver coin from around 350 BCE bears, on its obverse, a crude depiction of a human head. The reverse features a standing owl with the feathers of the head forming a beaded circle. The Hebrew inscription reads “Hezekiah the governor,” referring to the governor of the Persian province of Yehud (Judea).

Only a century later, in the Hasmonean and Herodian periods, Judean leaders consciously refrained from using figurative imagery, which they replaced with decorative elements and more extensive texts—apparently adhering to the pentateuchal prohibition against graven images. Instead, the pictured bronze prutah of John Hyrcanus I from the late second century BCE features, on the reverse side, two cornucopias adorned with ribbons, and a pomegranate between them. Its obverse bears a lengthy Old Hebrew inscription inside a wreath that reads, “Yehohanan the High Priest and the Council of the Judeans.”

Hasmonean coin of John Hyrcanus I, from the late second century BCE. The absence of any human or animal figures seems to signal widespread acceptance of the laws of the Torah and to herald the origins of Judaism. Photo in public domain.

In sum, the archaeological evidence for observance of the laws of the Torah in the daily lives of ordinary Judeans seems to situate the origins of Judaism around the middle of the second century BCE.

To delve into the intricacies of the textual and archaeological evidence for widespread observance of the laws of the Torah and the origins of Judaism, read Yonatan Adler’s article “The Genesis of Judaism,” published in the Winter 2022 issue of Biblical Archaeology Review.

——————
Subscribers: Read the full article “The Genesis of Judaism” by Yonatan Adler in the Winter 2022 issue of Biblical Archaeology Review.