Not all they are cracked up to be This rock-hewn altar was carved out of limestone and was approximately 8 feet on each side and 5 feet high. It is located about a mile from Shiloh, and the four corners point to the four directions on a compass (Exodus 27:1-2). The remains clearly demonstrate that animals were sacrificed on this high place. Photo: Yoel Elitzur.

The open-air altar shrine, called a bamah (plural bamot), is known through several books of the Biblical canon—but none more so than the Book of Kings, where they play a prominent role in assessing the performance of a king. Often referred to as “high places” in translations of the Bible, bamot were worship sites that usually contained an altar. A general understanding about the bamah and how it functioned can be gained by using evidence from the Biblical text as well as archaeology.

Even though some scholars translate bamah as “high place” or “hill shrines,” there is reason to believe that many of the shrines were located in urban centers.6 Since they are often found on hills, at city gates (2 Kings 23:8) and in valleys (Jeremiah 7:31), Martin J. Selman, director of postgraduate studies and deputy principal at Spurgeon’s College, London, says, “The essential feature of a bamah was, therefore, not its location or height, though it usually consisted of at least a [human-formed] platform, sometimes with an associated building or buildings (2 Kings 17:29, 23:19), but its function as a site for religious purposes.”7 It may then be easiest to understand high places not as a reference to temporal space, but to a “higher” theological place.

It is believed that bamot were artificially-made mounds, which may or may not include a prominent rock.8 There is some debate as to whether the word bamah refers to a naturally occurring mound that is already present or whether it refers to the altar itself.9 If it was something that was built, it could account for references to bamot being built (1 Kings 11:7; 14:23; 2 Kings17:9; 21:3; Jeremiah 19:5) and destroyed (2 Kings 23:8; 18:4). Often attached to the bamot were buildings (1 Samuel 9:22; 1 Kings 3:5)—houses/temples—where services were conducted and idols were kept (1 Kings 12:31; 2 Kings 17:29, 32; 23:19).10 Famed archaeologist W. F. Albright has claimed that the bamot were used for funerary purposes, but this has been challenged by W. Boyd Barrick.11

De Vaux suggested that Israelite bamot were modeled after the Canaanite ones.12 The bamah is also known from the Ras Shamra text.13 In Megiddo, located in the Carmel Ridge overlooking the Jezreel Valley from the west, a bamah was believed to have been found. The structure was a 24 x 30-foot oval platform, which stood six feet tall, was made of large stones and had stairs that lead to the top.14 A wall surrounded the structure. A cultic structure found in Nahariyah, located in Western Galilee, was discovered in 1947 and dates to the Middle Bronze Age, but was used until the Late Bronze Age.15 It consisted of a circular open-air altar, which compares to the one found in Megiddo, and a rectangular building probably used as a temple workshop.16 It is also believed that two bamot were found on a hill near Malhah from the seventh and sixth centuries B.C.E. De Vaux says, “There is no need for hesitation: these installations were bamah. Their dates range from the old Canaanite epoch to the end of the monarchy in Judah.”17 Therefore, it seems that the archaeological evidence supports the Biblical account in placement of the bamot and the time periods in which they were used. 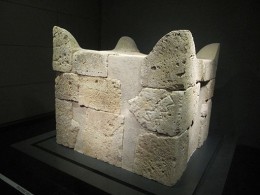 This bamah altar came from the high place found in Beersheba and dates to the eighth century B.C.E. It had been disassembled, some think during the time of King Hezekiah’s religious reforms (c. 715 B.C.E.). They were later used as wall stones, but the altar was easily reconstructed, as the stones were a different color than the rest of the stones in the wall. The four horns are a typical altar style that likely derive from Exodus 27:2. Photo: Tamarah/Wikimedia Commons.

It is the general consensus that before the Temple was built in Jerusalem, the people legitimately worshiped at the bamot.18 Leading scholar Beth Alpert Nakhai says, “The long legitimate bamot and the ancient sanctuary at Bethel were not viewed as symbols of Israel’s wicked past.”19 However, the text does not really say that this type of worship was all right even at that time. In fact, the stress on “the place” suggests that Solomon should be getting on with the building of the Temple in order for these shrines to be done away with and that the shrines were slowing down the process. Even at this stage the shrines were viewed as less than the ideal, especially considering that the ideal was possible. Yet, the understanding of “the place” is not simple. The phrase “the place where God is to set his name” is only found in three Old Testament books, Deuteronomy, Chronicles and Kings.

Some scholars, such as Selman, believe that as long as authentic Yahweh worship was performed at the bamot, there was not a problem with their existence, particularly the shrine at Gibeon (1 Samuel 9:16-24; 1 Kings 3:4-5; 2 Chonicles 1:3-7).20 They argue that it was not until the reforms of Josiah that the shrines were viewed as unacceptable. These scholars have not ignored the earlier pronouncements against the bamot, but have interpreted them as judgments against foreign worship or syncretism, especially regarding the asherah poles and the massebot.21

Read “Asherah and the Asherim: Goddess or Cult Symbol?” in Bible History Daily >>

Therefore, one must determine why the bamot are so problematic. The most convincing theory is that after the Temple was built in Jerusalem, it was no longer appropriate to worship elsewhere (1 Kings 3:2), especially in light of Deuteronomy 12.23 However, when exactly this was understood by historical Israel is harder to determine. Richard D. Nelson of the Perkins School of Theology claims that this is to set the worship of Yahweh apart from the worship of Baal: “The plurality of shrines inevitably reflected the local multiplicity of Canaanite Baal worship, implying a Yahweh of Dan and another Yahweh at Bethel.”24 Theological heavyweight Walter Brueggeman concurs with this analysis and says that these shrines compromised Yahweh’s jealous claim to Israel.25 This does not mean that those who were living in Israel during the monarchal period would have recognized this shift, but that the condemnation is a reflection of the author/redactor’s theology.26

This theory that the condemnation is a reflection of a later understanding would also explain the exceptions to criticism of the high place, such as 1 Samuel 9:12-14, 19, 25 and 1 Samuel 10:5, 13. In other words, the actual opinion of the people of the monarchy comes through in the text, but that later theology has begun to condemn worship in places other than the Temple in Jerusalem. Jeffery J. Niehaus of Gordon-Conwell Theological Seminary says, “The Carmel event clearly shows that Yahweh can approve a sacrifice not offered at the ‘chosen place,’ and in a most dramatic way, when it is offered in a special context and for a special purpose.” Yet, the bamot are not “special” as in unique or uncommon; they are a place of ongoing regular worship. Therefore, the example of Carmel only heightens the contrast between a special theophanic event and an ongoing part of the cult, which demonstrates a stage in the development of centralization.

Ellen White, Ph.D. (Hebrew Bible, University of St. Michael’s College), formerly senior editor at the Biblical Archaeology Society, is now contributing editor. She has taught at five universities across the U.S. and Canada and spent research leaves in Germany and Romania. She has also been actively involved in digs at various sites in Israel.

2. An example of a bamah can be found in Yigael Yadin, “Beer-Sheba: The High Place Destroyed by King Josiah,” Bulletin of the American Schools of Oriental Research 222 (1976), p. 10. It should be noted that while Yadin claims that this is a bamah, the original excavator of Beer-Sheba claimed that the bamah there had been destroyed in Stratum II.

4. It has been claimed that other than when used of Israel, the term bamot is never used cultically of any other culture other than Moab. In the Biblical text it is only found in connection to Moab (1 Kings 11:7; Isaiah 15:2; 16:12; Jeremiah 48:35), and it is also found on the Mesha Stela at 11.11, 13. However, it is not found in any Canaanite literature or any Phoenician or Ugaritic texts (In Numbers 33:52 it appears to refer to the Canaanites, but that they were camped in the plains of Moab maintains the exclusive connection with the Moabites). For more on the connection to Moab, see J. M. Grintz, “Some Observations on the High-Place in the History of Israel,” Vetus Testamentum 27 (1977), p. 111–113.

21. Selman, NIDOTTE 1, p. 670; De Vaux, Ancient Israel, p. 286. A massebot “as an object of cult, it recalled a manifestation of a god, and was a sign of the divine presence”; De Vaux, Ancient Israel, p. 285. This is related to the narrative of Jacob at Bethel who sets up a massebot and declares the place Beth El (Genesis 28:18; 31:13). This is related to the asherah, which represents a female deity, as opposed to the male deity of the massebot; De Vaux, Ancient Israel, p. 286 (This is debated based on evidence from Gezer and Tel Kitan, which suggests it could be either male or female according to Keel and Uehlinger, Gods, Goddesses, p. 33). This relates to the reference in 2 Kgs 3:2 to the massebot of Baal. Both seem to be represented by poles; the asherah can also be a living tree and sometimes the name of the goddess herself; the massebot can also be a stone pillar; De Vaux, Ancient Israel, p. 286. The bamot are also associated with hammanim which used to be translated “pillars of sin,” but are now understood as “altars of incense” due to the evidence provided by the Nabatean and Palmyra inscriptions (1 Kings 3:33; 22:44; 2 Kings 12:4); De Vaux, Ancient Israel, p. 286. Mazar suggests that the “Bull-shrine” he has excavated could possibly be a bamot, where either Yahweh or Baal was worshipped due to the connection both gods have with the figure of the bull. For sketches and photos of the site see, A. Mazar, “The ‘Bull-Site’ – An Iron Age I Open Cult Place,” Bulletin of the American Schools of Oriental Research 247 (1982), pp. 27–42.

This Bible History Daily feature was originally published on October 22, 2014.