From the September/October 2017 Biblical Archaeology Review

Amihai Mazar (better known as Ami) is one of Israel’s most highly regarded archaeologists. He recently retired from the Hebrew University of Jerusalem. I remember long ago when I featured him on the cover of BAR together with his famous uncle, Benjamin Mazar, a former president of the Hebrew University and a famous archaeologist; Ami was angry. He didn’t want to be pictured with his uncle. Ami wanted to make it on his own—not because of his relationship to his distinguished uncle. Well, Ami certainly has now made it on his own.

This is by way of introducing a seminal article that he recently published that includes a critical assessment of the historicity of the United Monarchy of Israel. It is a thoroughly balanced review of the matter, considering both the Biblical text and the archaeological evidence. It is too detailed to rehearse here in detail—and, as he says, it’s “highly specialized and complicated”—but it is worthwhile just to set forth the issues and Ami’s conclusions.1

His conclusion is quite nuanced: “I adhere to the moderate views which, in spite of considerable variations and degrees of confidence, agree that the [Biblical] authors worked with ancient sources, including oral and written narratives, transmitted poetry, archival documents, public inscriptions, etc.” Although not written in the tenth century B.C.E. (the time of the United Monarchy), the Biblical narratives “retain memories of realities rooted in that century.”

Let’s begin by considering the famous passage in 1 Kings 9:15–19, which tells us that King Solomon fortified Hazor, Megiddo and Gezer. The great Israeli archaeologist Yigal Yadin long ago attributed the three impressive six-chambered city gates at these three major sites to the time of Solomon. For a long time, this dating was considered secure. Then Israel Finkelstein of Tel Aviv University came along with his “Low Chronology,” according to which he extends the time of the relevant archaeological period—Iron IIA—by 80–100 years or so, long after King Solomon’s time. Thus he dates these gates to a later time in the Iron IIA, initially about a hundred years later, probably to the time of King Ahab. Ami Mazar disagrees with Finkelstein and convincingly argues that, although some time adjustment should be made in the length of the archaeological period involved, these monumental gates “cannot be dated later than the tenth century [B.C.E.],” the time of King Solomon. If Iron IIA extended into the ninth century B.C.E., Finkelstein could be right that the gates were later than Solomon’s time. But there is no doubt that it began in the tenth century B.C.E. Thus the gates could also be from the tenth century B.C.E. “The question of dating the monumental structures at Megiddo, Hazor and Gezer,” writes Ami Mazar, “remains in my view unresolved. The evidence is ambivalent, and a tenth century date for this architecture remains plausible. Thus 1 Kings 9:15–19 can still be taken as a source relating to tenth-century B.C.E. reality.” Perhaps there were two phases to Iron IIA, early and late, but “the date of the transition between these two sub-phases is not entirely clear.” (This tells you why the dating of potsherds is so important in archaeology; subtle changes in pottery could help us to distinguish early from late in the same period.)

Next let’s go to Jerusalem. It was surely a small city in King David’s time, perhaps a bit more than 10 acres with about a thousand residents. Solomon’s annexation of the Temple Mount more than doubled the size of the city with a population of about 2,500 people. Although it was small, it was strong and not to be trifled with. The huge Stepped Stone Structure (SSS), rising to the height of a nine-story building, was there in the tenth century B.C.E., if not before. So was the Large Stone Structure (LSS) on top. Ami Mazar agrees with the following senior archaeologists who date this complex to the tenth century B.C.E. or slightly earlier: Kathleen Kenyon (who first came upon walls of the LSS), Yigal Shiloh, Eilat Mazar (who excavated the LSS), Jane Cahill, Margreet Steiner and Avraham Faust. 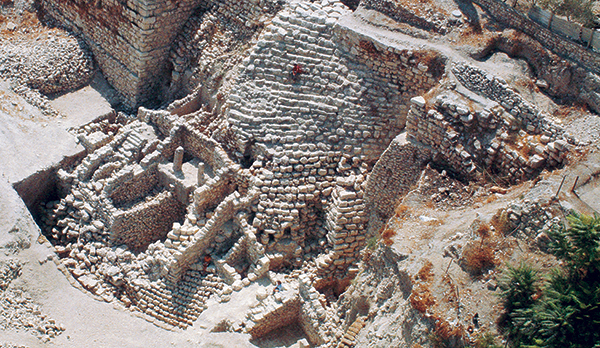 “This immense complex [was] one of the largest structures in ancient Israel,” and the massive fortifications from the Late Bronze Age protecting the Gihon Spring and excavated by Ronny Reich and Eli Shukron, continued in use during the time of King David and King Solomon.

Eilat Mazar has also been excavating structures south of the Temple Mount that “must have been part of Jerusalem’s royal administrative complex” in the time of the United Monarchy. Enabling her to date this complex were large amounts of Iron IIA pottery. In his usual cautious way Ami Mazar concludes, “Although the excavator’s specific dating of these structures to the time of Solomon may be regarded as conjectural, the date cannot be far off, since the pottery in the fills is clearly Iron IIA, namely dated to the tenth to ninth centuries B.C.E.”

As to Solomon’s Temple as described in the Bible, its plan is known in temple architecture of the Levant since the second millennium B.C.E. and continues into the Iron Age. Although archaeology cannot determine whether Solomon was the builder of the Temple, “the Bible does not hint at any other king who may have founded such a temple.”

That there was a central government ruling the United Monarchy is shown by the recent excavation of Yosef Garfinkel at Khirbet Qeiyafa, a site in the Judahite Shephelah on the border with the Philistines.a Although a small site, Qeiyafa was protected with a massive casemate wall surrounding the site and a large public building on the summit. It was occupied only briefly in the late 11th or early 10th century B.C.E., the time of kings Saul and David. As Ami Mazar observes, “There must have been a central authority that initiated this well-planned building operation. … While no Canaanite parallels are known for either the city plan or the fortifications,2 these are a prototype for later Judean [Judahite] towns, such as Beth Shemesh, Tel en-Nasbeh (Biblical Mizpah), Tel Beit Mirsim and Beersheba.”

Finally, Solomon’s kingdom appears to have been backed up with an elaborate metallurgical industry. Initially the vast copper mining operation in the Wadi Feinan in Jordanb was associated with the Edomites who inhabited the high plateau above the mines. But there is no evidence of these settlements in Edom earlier than the eighth century B.C.E. Instead, these copper mines at the base reflect an affinity with a similar copper mining and smelting operation in the Timnah Valley in the Negev of Israel.c “It is now clear,” Ami Mazar tells us, “that large-scale copper mining and smelting industry flourished in the Arabah Valley throughout the late eleventh, tenth and ninth centuries [B.C.E. The structures in Feinan] indicate that the industry was administered and controlled by a central authority” and worked by a tribal-state of semi-nomads.

This should be enough to entice the more scholarly minded to explore the additional and often powerful details in Ami Mazar’s trenchant article, evidencing the existence and nature of Israel’s United Monarchy ruled by Saul, David and Solomon. Yes, they very likely were actual historical figures, and they had a kingdom—although not nearly so vast as the Bible describes. Much of the Biblical text is what Ami Mazar recognizes as being of a “literary-legendary nature.”

“First Person: Did the Kingdoms of Saul, David and Solomon Actually Exist?” by Hershel Shanks was originally published in Biblical Archaeology Review, September/October 2017.

a. Yosef Garfinkel, Michael Hasel and Martin Klingbeil, “An Ending and a Beginning,” BAR, November/December 2013.

2. For this and other reasons, Ami Mazar rejects Nadav Na’man’s suggestion that Qeiyafa is a Canaanite town.