Exploring the Biblical and archaeological evidence 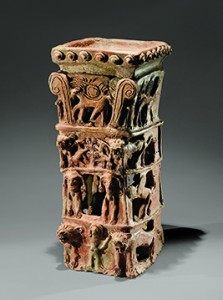 This four-tiered cult stand found at Tanaach is thought to represent Yahweh and Asherah, with each deity being depicted on alternating tiers. Note that on tier two, which is dedicated to Asherah, is the image of a living tree, often thought to be how the asherim as a cult symbol was expressed. Photo: © The Israel Museum, Jerusalem/Israel Antiquities Authority (photograph by Avraham Hay).

Who is Asherah? Or, perhaps, what is asherah?1 The Hebrew means “happy” or “upright” and some suggest “(sacred) place.” The term appears 40 times in the Hebrew Bible, usually in conjunction with the definite article “the.” The definite article in Hebrew is similar to English in that personal names do not take an article. For example, I am Ellen, not the Ellen. Thus it is clear that when the definite article is present that it is not a personal name, but this does not eliminate the possibility of it being a category of being (i.e., a type of goddess). There are only eight cases where the term appears without an article or a suffix—suffixes in Hebrew can be used to express possession, e.g., “his,” “their,” etc. Interestingly, the plural of the term, asherim, occurs in both masculine and feminine forms.

This diversity of grammar leads to the two questions at the beginning of this article: Who is Asherah? What is asherah? The reference may be to a particular goddess, a class of goddess or a cult symbol used to represent the goddess. It is sometimes difficult to distinguish what meaning is intended (cf. Judges 3:7).

This goddess is known from several other Ancient Near Eastern cultures.2 Sometimes she is known as “Lady Asherah of the Sea” but could be taken as “She who walks on the sea.” As Athirat, a cognate name for Asherah, she is mother of 70 children (this relates to the Jewish idea of the 70 guardian angels of the nations). Arguments have been made that Asherah is a figure in Egyptian, Hittite, Philistine and Arabic texts. Egyptian representations of “Qudshu” (potentially the Egyptian name for Asherah) show her naked with snakes and flowers, sometimes standing on a lion. Whether this should be interpreted as Asherah is contested and thus should be viewed with caution. Another suggestion is Asherah is also the Hittite goddess Asertu, who is married to Elkunirsa, the storm god (she is often viewed in connection with the regional storm god).

As Athirat in Arabian inscriptions there is a possibility that she is seen as a sun goddess (this is perhaps a connection in Ugaritic literature as well). In Phoenician, she is the mother goddess, which is different from Astarte, the fertility goddess; there is some debate regarding a confusion of the two relating to 1 Kings 18:19. In Akkadian, she might be Asratum, the consort of Amurru (chief deity of early Babylon). The connection is made because the Akkadian kingship (early 14th century B.C.E.) takes the title “servant of Asherah.”

The Ugaritic texts provide the most insight into the goddess. Ras Shamra (located on the Syrian coast) texts, discovered in 1929, portray her as Athirat, the wife of El. Their sexual encounter produces dusk (Shalim) and dawn (Shahar), among others. Her relationship with Baal is complicated, and it is suggested that Baal has killed large numbers of her children.3 In these texts, she intercedes with El to get Baal a palace, after Anat’s (his “sister” and her “daughter”) request is refused. She supplies a son to reign after Baal descends into the netherworld. The relationship is further complicated by debates as to whether she is the mother of Baal or his consort or both. The idea of her being a consort comes from later Phoenician sources, where scholars have associated Asherah with Tinnit. Yet, the connections are tentative, and many scholars question the association. A hypothesis also suggests that Baal usurped El’s position and also took his consort, Asherah, which would make the relationship very oedipal. This inscription found on a pithos at Kuntillet ‘Ajrud (similar to an inscription found at Khirbet el-Qom) refers to “Yahweh and his Asherah.” This has led some scholars to believe that in popular religion Asherah was understood to be the wife of Yahweh, much the same as she under her cognate Athirat was considered to be the wife of El. Photo: Courtesy Dr. Ze’ev Meshel and Avraham Hai/Tel Aviv University Institute of Archaeology.

Asherah or asherim refer to more than just the person of the deity. These terms are often, especially in the Biblical texts, used for consecrated poles. These poles represent living trees, with which the goddess is associated. Some scholars believe that asherim were not poles, but living trees (like the one depicted on the Tanaach Cult Stand). The poles were either carved to look like trees or to resemble the goddess (this could also be reflected in the numerous pillar figurines found throughout Israel). Remains of these poles are determined by postholes and rotted timber, which resulted in differently hued soil. There is great debate as to whether the cult symbol lost its ties to Asherah (and became a religious symbol on its own without the worshippers knowing anything about the goddess who originated it) or is seen as a representation of Asherah herself (similar to the way the cross is a representation of Jesus to Christians).

The relationship between Asherah and Israel is a complicated one.4 Does the text refer to the goddess or her symbol?5 Jeroboam and Rehoboam fostered Asherah worship (1 Kings 14:15, 23). Worship of Asherah was highly encouraged by Jezebel, with the presence of 400 prophets who held a place in the court of her husband King Ahab (1 Kings 18:19). Worship of Asherah is given as a reason for deportation (2 Kings 17:10,16). Attempts to eradicate the worship were made by Asa, Josiah, Jehoshaphat, Hezekiah and Gideon (Exodus 34:13-14; Deuteronomy 7:5; Judges 6:25-30; 1 Kings 15:13/2 Chronicles 15:16; 2 Kings 23:4,7/2 Chronicles 34:3,7; 2 Kings 21:7/2 Chronicles 33:3,19; 2 Chronicles 19:3; 2 Kings 18:4). However, devotion to the cult symbol remained (Isaiah 27:9; Jeremiah 17:1; Micah 5:14). It is particularly interesting that objections to Asherah are found mostly in Deuteronomistic literature, rather than in the prophets. In both cases, the authors are much more concerned about the worship of Baal rather than Asherah.

This apparent lack of concern might be due to a popular connection between Yahweh and his Asherah. Inscriptions from Kuntillet ‘Ajrud (on a pithos; see image above) and Khirbet el-Qom (on walls) contain the phrase “Yahweh and his Asherah.”6 Some take this to mean it was believed that she was seen as the wife of Yahweh and represents the goddess herself. Yet, the presence of the suffix could suggest that it is not a personal name. This has led others to believe it is a reference to the cult symbol. A more obscure opinion claims it means a cella or chapel; this meaning is found in other Semitic languages, but not Hebrew. Because of the similarities between El and Yahweh, it is understandable that Asherah could have been linked to Yahweh. While some readers might find the idea that Yahweh had a wife disturbing, it was common in the ancient world to believe that gods married and even bore children. This popular connection between Yahweh and Asherah, and the eventual purging of Asherah from the Israelite cult, is likely a reflection of the emergence of monotheism from the Israelites’ previous polytheistic worldview.

1. One of the most influential studies on Asherah is Saul M. Olyan, Asherah and the Cult of Yahweh in Israel, Society of Biblical Literature Monograph Series (Atlanta: Scholars Press, 1988). Olyan’s study provides background for this piece.

4. For one of the best treatment of Asherah and Israel, see Judith M. Hadley, The Cult of Asherah in Ancient Israel and Judah: Evidence for a Hebrew Goddess, University of Cambridge Oriental Publications (Cambridge: Cambridge University Press, 2000).

Visit the BAS Library for more on Asherah:

Did God Have a Wife?

Folk Religion in Early Israel: Did Yahweh Have a Consort?

Was Yahweh Worshiped as the Sun?

Who or What Was Yahweh’s Asherah?

Did Yahweh Have a Consort?

This Bible History Daily feature was originally published on November 4, 2014.