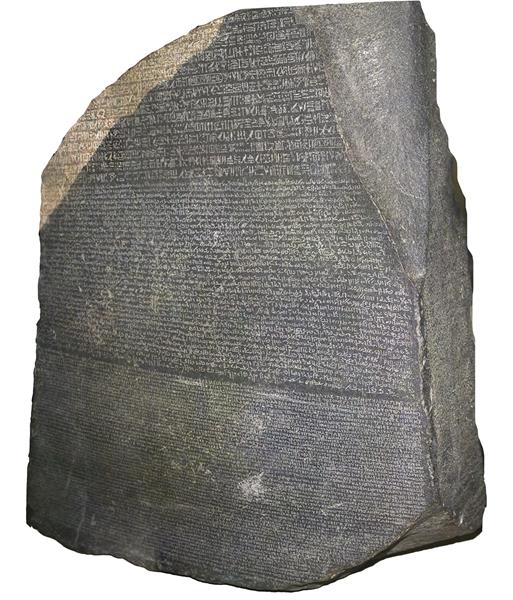 TWO HUNDRED YEARS AGO TODAY, on September 14, 1822, Jean-François Champollion (1790–1832) cracked the code of the Egyptian hieroglyphic script and the language behind it. After two years of copying and studying various inscriptions, the French schoolteacher uttered the famous, “Je tiens l’affaire” (I’ve got it!), before fainting from exhaustion and excitement. The first word he could read was the royal name Ramesses. He was then able to make rapid progress, but his Egyptian Grammar appeared only posthumously. Essential to uncovering the ancient Egyptian civilization, the ability to read Egyptian language ushered a new scholarly discipline—Egyptology.

What gave Champollion the edge over his unsuccessful predecessors was the recent discovery, in 1799, of the Rosetta Stone, which contains the same text in Egyptian and Greek.

The Rosetta Stone refers to a fragmented Egyptian stela discovered near the Mediterranean port city of Rasheed (also known as Rosetta), in the western Nile Delta. Inscribed in three different languages, the famed artifact contributed significantly to the decipherment of ancient Egyptian hieroglyphs and the language of the pharaohs. Originally set up in a temple dedicated to King Ptolemy V (r. 204–180 B.C.E.), the stela is now on display in the British Museum in London.

The chance discovery of the stela took place in July 1799, during the French occupation of Egypt. Napoleon’s army was clearing debris around the 15th-century fort known locally as Borg Rasheed, to prepare defensive positions against arriving British forces, when they found a massive block of stone with one side that was polished and completely covered with about a hundred lines of engraved writing.

The exciting find was shipped to the Institut d’Égypte in Cairo, a scientific institution established by Napoleon to carry out research, study, and publication of Egypt’s natural and cultural riches. After their defeat, the French forfeited the stela to the victorious British. The prized find was then loaded on a ship for England in February 1802. It spent a year in the Society of Antiquaries of London, from where it was transferred to the British Museum, where it remains to the present day.

The stone, which is made of grandiorite—a hard, dark gray, volcanic rock—weighs a whopping 1,675 pounds and measures 3.7 feet tall, 2.5 feet wide, and nearly a foot thick. The stela was discovered incomplete, however, and the bottom right corner and almost one third of the top are lost, together with the relevant parts of the inscription. A modern English inscription is painted in white on either side: “Captured in Egypt by the British Army in 1801” on the left and “Presented by King George III” on the right side.

The preserved portion of the inscribed text gives a priestly decree commemorating the first anniversary of the coronation of Ptolemy V, in the spring of 196 B.C.E. It opens with a long list of titles and epithets of the Greek-Egyptian king, who is celebrated for his religious piety and love for Egypt. In the second section, the Egyptian priests enumerate all the benefits the king has conferred upon Egypt. The last part proclaims how the king should be honored in the temples throughout the land. The inscription closes with the command that the decree is to be engraved on stelae and publicly exhibited in temples across Egypt.

Presented in three languages (Middle Egyptian, Demotic, and Greek) in three successive bands, the text was intended to proclaim the monarch’s achievements in the sacred hieroglyphic script as well as the two administrative tongues of the empire. However, none is preserved completely, as only 14 incomplete lines of the calculated 29 original lines of hieroglyphs are extant, and many lines of the other two versions are chipped off at the right margin. The original form of the decree was Demotic, from which it was loosely translated into Greek and hieroglyphic Egyptian.

The Rosetta Stone proved to be the decisive key to deciphering Egyptian hieroglyphs. The ability to read ancient Egyptian texts unlocked a wealth of textual and historical sources related to the Bible, including the famed Merneptah Stele, which furnished the earliest mention of a people called Israel, and numerous other accounts that linked Egyptian and biblical history.

Among the many recent books on the subject are the Egyptologist John Ray’s The Rosetta Stone and the Rebirth of Ancient Egypt (2007) and two popular books: Jed Z. Buchwald and Diane Greco Josefowicz’s The Riddle of the Rosetta (2020) and The Writing of the Gods (2021), by Edward Dolnick. The Digital Rosetta Stone Project offers digital tools to engage with the artifact.