“This is a class, so you better come prepared,” said Matthew Adams, Director of the Albright Institute of Archaeological Research in Jerusalem. Over the past […] Any time that a character in the Bible discovers, accesses, or writes a book, it’s significant. Yet are these mentions of media about an actual […] 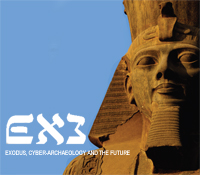 Watch an exclusive video of digital scanning conducted on the famed Arch of Titus. In this lecture presented at The Explorers Club in New York, Sarah Yeomans examines a recently excavated archaeological site that has substantially contributed to our understanding of what ancient Romans did to combat disease and injury. On Dec. 24, 2016, Joseph Fitzmyer died at the Jesuit Manresa Hall in Philadelphia, Pennsylvania. He was recognized as one of the premier Biblical scholars of his generation. Using NASA data and 3D modeling, researchers have dispelled a long-held theory regarding the relationship between two famous monuments in ancient Rome. Video: How to Make a Mudbrick at Tell Timai (Ancient Thmuis)

Excavation staff member Marta Lorenzon provides a look into the creation of new mudbricks to conserve the ancient walls at Tell Timai. Explore an Egyptian excavation. Meet Kufti archaeologists, explore ancient streets and the mudbricks that shaped them and dive into the port of Alexandria. The 2014 excavations at Tell Timai, directed by Robert Littman and Jay Silverstein, are exposing the ancient city of Thmuis in the Egyptian Nile Delta. In this studio-quality production, Tell Timai archaeologists provide a look at their dig site and their 2014 research while providing viewers with a taste of travel in Egypt and the atmosphere on an archaeological field crew.