Most scholars believe that early Christians did not use the cross as an image of their religion. So how did the cross become modern Christianity’s most popular symbol? 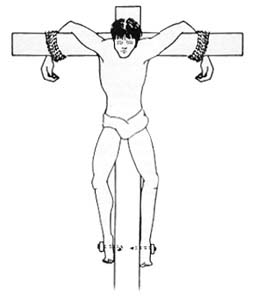 What do we know about the history of crucifixion? Hershel Shanks looks at evidence of Roman crucifixion methods as analyzed from the remains found in Jerusalem of a young man crucified in the first century A.D. Jesus’s resurrection happens off-screen. The actual moment when Jesus rises from the dead was not witnessed and, therefore, not explicitly described in the Gospels. Nevertheless, that has not stopped Christians from depicting this significant moment over the course of the past two millennia. The staurogram, a crucifixion symbol made out of the Greek letters tau-rho, is 200 years older than the oldest previously-known images of Jesus on the cross. The Gospel of Matthew describes an earthquake during Jesus’ Crucifixion. Sediment disturbances mentioned in a recent article in the International Geology Review points to the Biblical earthquake and may give a concrete date of the crucifixion. Painting by James Jacques Tissot. In the history of crucifixion, the death of Jesus of Nazareth stands out as the best-known example by far. Crucifixion in antiquity was actually a fairly common punishment, but there were no known physical remains from a crucifixion. Then, in 1968, archaeologist Vassilios Tzaferis excavated a Jerusalem tomb that contained the bones of a crucified man named Yehohanan. As Tzaferis reported in BAR, the discovery demonstrated the brutal reality of Roman crucifixion methods in a way that written accounts never had before.