According to scholar Christopher Rollston, there are many examples of the marginalization of women in the Bible. The serpent in the Garden of Eden is portrayed as just that: a serpent. The story in Genesis 2–3 contains no hint that he embodies the devil, Satan or any other evil power. So where does the devil come into the details of Eden? Biblical scholar Shawna Dolansky examines how the serpent became Satan. 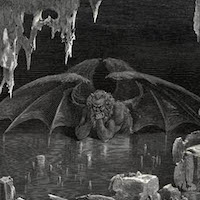 Does our modern conception of Satan have any resemblance to the devil in the Bible? Just who is Satan?

Examine who Satan really is and where he appears in the Hebrew Bible and the New Testament in a BAS Library special collection of articles. On what day did Jesus rise? After three days or on the third day? Ben Witherington III examines this question in BAR. What does the Bibleclaim about the Israelites’ forced labor for the Pharaoh? Looking for the most plausible match in ancient Egyptian architecture. Are the 10 Commandments really a moral code, or did the ancients understand them rather as the constitutional basis of a political theocracy? The Book of Genesis tells us that God created woman from one of Adam’s ribs. But Biblical scholar Ziony Zevit says that the traditional translation of the Biblical text is wrong: Eve came from a different part of Adam’s body—his baculum. When Moses came down from the mountain and saw the Golden Calf, he became enraged and hurled the two tablets to the ground, smashing them to smithereens. And he burned the Golden Calf until it became a powder that he mixed with water, and then he made the wayward Israelites drink the resulting potion, thereby calling attention to their infidelity.