In the study of Biblical archaeology, Biblical texts and archaeological finds must be examined critically and independently, but ultimately, they must be interpreted together. Such an approach can be applied to King David’s Palace and the Millo. There is no shortage of controversial sites and monuments in Israel. Among the less well known to visitors to Jerusalem is the so-called Tomb of […] An Iron Age Judahite fortress sits on a small hill, surrounded by modern apartment buildings. The 2,700-year-old fortress is located in the French Hill neighborhood […] A meeting point of eastern and western Jerusalem, the famous Tower of David Citadel sits right inside the Old City’s Jaffa Gate. More than 2,500 […] Some of the most famous churches in Jerusalem were built during the Christian Crusades by Crusaders wishing to memorialize sites they believed to have great Christian significance. For more than a hundred years, an extraordinary water tunnel in Jerusalem has been attributed to King Hezekiah, who dug it to protect the city’s water supply during the Assyrian siege of 701 B.C.E. Hence its name, Hezekiah’s Tunnel. However, recent scholarly publications now argue that the tunnel was not built by Hezekiah but by his predecessor or his successors. According to the Israel Antiquities Authority, evidence for a powerful earthquake mentioned by the prophets Amos and Zechariah has been discovered in Jerusalem. According to […] While excavating a house dated to the reign of King David, an archaeology team made a shocking discovery, a cache of 29 fossilized shark teeth […] 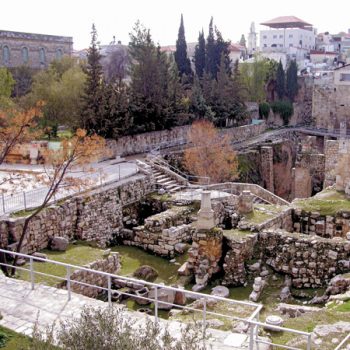 The Bethesda Pool, where Jesus heals the paralytic man in the Gospel of John, is a complex site. It appears to have been a mikveh, or ritual bath.